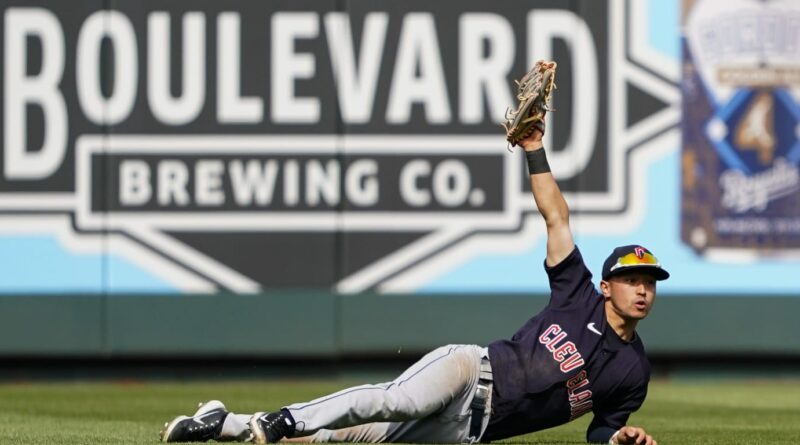 KANSAS CITY — Steven Kwan may be everything the Guardians have been searching for over the last few seasons. The problem is, the team needs more than one spark in its lineup to start to see success.

Kwan has been in the Majors for all of two games, and has already captured the heart of the fanbase with his plate discipline, bat-to-ball skills, baserunning and defense — all of which were on full display on Saturday afternoon in Cleveland’s 1-0 extra-inning loss to Kansas City at Kauffman Stadium.

Aside from the strong pitching the Guardians have received thus far, Kwan has been the lone source of optimism this season. It’s only been two games, which is a ridiculously small sample size, but in a time when some could easily get overwhelmed by the jump to the big leagues, Kwan has demonstrated each of the tools that the organization has raved about throughout his Minor League career, showing why it’s easy to believe he can have a successful career in the Majors.

Let’s take a look at the tools we’ve seen from the Guardians’ No. 15-ranked prospect thus far:

Plate discipline
Kwan admitted after Opening Day that his heart was racing as he stepped into the batter’s box for the first time as a Major Leaguer. He said it felt like he was floating, as he was officially accomplishing a dream he started to fantasize about as a kid. Yet somehow, his approach at the plate gave off the impression he had been in the Majors for years.

He watched the first pitch go by for a ball before grounding out in his first big league at-bat. In his second plate appearance, he demonstrated patience, watching five pitches — four of which were balls — to earn a free pass to first base. That’s when it truly set in that he knew he belonged here.

“That just kind of got me back in that mode that this is the same game and I have great guys around me saying that same thing,” Kwan said. “I’m really happy that they can help me along that way.”

From there, he kept cruising. He drew another walk, logged a ninth-inning single — his first Major League hit — and earned a quick move up in the order, getting penciled into the two-spot in Saturday’s lineup. Once again, he wasn’t rattled, as he added another walk, single and double to his stats sheet.

Bat-to-ball skills
Kwan’s bat-to-ball skills may be the tool everyone within the organization has praised the most. The patience he displays at the plate is taken to a whole new level when breaking down how selective he is with the pitches he swings at. In each of his first two games, he’s seen 18 pitches — none of which induced a swing and a miss.

How has he been able to stay so calm?

“Just not trying to let thoughts go too far,” Kwan said. “Just taking deep breaths in and out, just one at a time … and if things get too much, step out and reset and get back to it.”

Baserunning
From the start of Spring Training, Guardians manager Terry Francona has emphasized (and re-emphasized) the importance of baserunning for a team that could have some offensive struggles, as we’ve seen thus far. He’s been adamant that they’ll have to play small ball and take the extra base each time they have an opportunity to. And that’s exactly what Kwan did on Saturday.

A hit that has an exit velocity of 92 mph with a launch angle of 15 degrees like Kwan had in the ninth is a single 71.5% of the time, according to Baseball Savant. But Kwan chose to be in the group of 14.2% who are able to extend it to a double by not breaking stride right out of the box.

“It’s nice to see him do a lot of things,” Francona said. “I’m glad he has the confidence to do that because that’s the right situation and he came out of the box good. He’s certainly been a bright spot.”

Defense
The team is more than comfortable playing Kwan in all three outfield spots, but Francona said before the game he’ll probably see the most time in left field. He proved pretty quickly that wasn’t a problem for him, flashing some leather to rob Whit Merrifield of a hit on a diving grab to his glove side — just adding to the impressive resume he’s been able to build in a matter of hours.

“I told him to just relax and play and treat it like it’s Spring Training,” center fielder Myles Straw said. “No pressure, just go out there and have fun. If he does that, he’s going to be a really good player.”