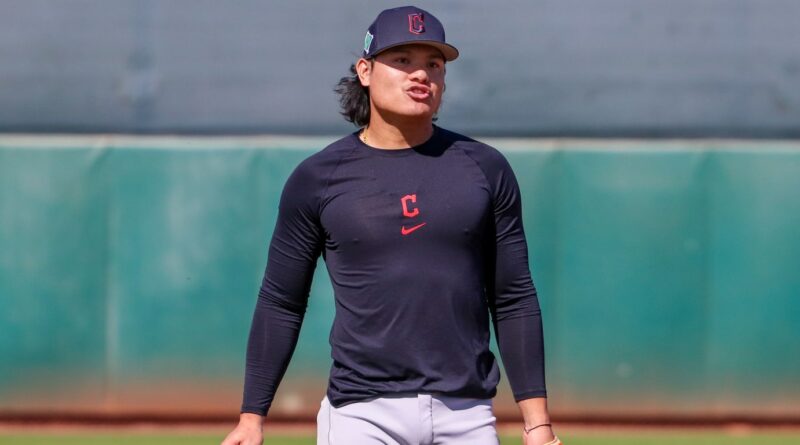 Can’t make it to Goodyear, Ariz., for Spring Training? No problem. Check back here throughout camp to get all the sights and sounds from Guardians big league camp.

Sometimes the ‘best shape of your life’ means gaining weight (March 21)
Sight: It’s become a cliche for athletes to report to Spring Training and say that they’re in the best shape of their lives. Usually, that means the player spent the offseason working on his diet or workout regimen to enter camp in better shape. But sometimes, it can mean the player used the winter to bulk up.

Both Yu Chang and Oscar Mercado know they’re coming into Spring Training fighting for playing time. Mercado is competing with guys like Bradley Zimmer, Josh Naylor, Steven Kwan, Amed Rosario and others for a corner-outfield spot, while Chang is hoping to at least secure the utility role among a handful of middle infielders. Both ended up gaining significant weight to try to help their causes in 2022.

Sound: “Oscar gained, I think, 20 pounds, and by all accounts, doing the testing, he hasn’t lost any agility. So that’s good. If you’re stronger and bigger and the ball is coming off his bat better, but he can still move, that’s really good.” — Guardians manager Terry Francona

“Chang got a lot stronger. I’d say his lower half [especially]. Like good weight, though. By all accounts, muscle and not … me. He looks good.” — Francona

Quantrill misses his infielders (March 17)
Sight: The Guardians are hoping to get all of their regular starters into live batting practice over the next few weeks, and on Thursday, it was Cal Quantrill‘s turn. He rotated through facing Franmil Reyes, Josh Naylor, Yu Chang, Jose Ramirez and Bobby Bradley. But against Bradley, he ran into some trouble defensively — not by making a bad pitch.

Bradley hit a popup high in the air just behind the pitcher’s mound. Usually, that’s when Quantrill would get out of the way to allow his infielders to make the play. But in live batting practice, Quantrill is the only defender on the field. He took a hard right turn toward third base with his back to the batter trying to track the sky-high popup and clearly was having difficulty, as he made a last-ditch effort with a dive to try to make the play, but came up empty handed.

Sound: The dugout of hitters couldn’t help themselves but scream for Quantrill to make the play as he was tracking it in the air. And Reyes’ bellowing laugh echoed through the dugout after Quantrill attempted to dive for a ball that was just a foot or two away from the mound. While he was mid-leap, Quantrill screamed out, “Josey, where the [heck] are you?” as if he was hoping his All-Star third baseman would magically appear to bail him out of the situation.

The laughs continued throughout the entirety of the at-bats against Quantrill. Reyes stepped to the plate and Quantrill asked if it was OK to pitch him inside. Reyes said, “Yes, yes. Just don’t hit me or I’ll have to kick your [butt],” with a big grin on his face.

Franmil and Straw’s playful rivalry (March 15)
Sight: Live batting practice will be more prevalent at this year’s Guardians camp than any other Spring Training. The team knows its days are numbered to get ready for Opening Day, so having its hurlers face its hitters is the best way to get everyone game ready. With that comes some jovial trash talking.

Justin Garza, Sam Hentges and Zach Plesac rotated through a four-man batting order of Myles Straw, Franmil Reyes, Jose Ramirez and Amed Rosario. The hitters constantly yelled at each other — mostly in Spanish, unless a joke was being directed at Straw — as they took turns stepping into the box. Suddenly, all the heat was being thrown at Straw. With Shane Bieber and Triston McKenzie sitting on the bleachers as spectators and the three other hitters watching from the field or in the dugouts, Straw couldn’t escape the comments.

Sound: After Straw struck out against both Garza and Hentges, Reyes quipped, “Strikeout No. 2!” Straw waited for his comeback when Reyes lifted a fly ball into left field against Hentges, as Straw yelled out, “Can of corn.”

Reyes couldn’t help but smile throughout the entire exchange and he burst into laughter during Straw’s next at-bat against Plesac, when the rest of the hitters took Reyes’ side. Straw swung at a pitch in the dirt and Ramirez and Rosario chirped from the dugout, while Reyes said, “Bro, what happened?” Straw picked up the ball and threw it (softly) at Reyes to get him to stop. The slugger responded, “Why me? They’re [the ones] yelling at you.”

It was Straw who got the last laugh, ripping a line drive into left field to conclude his at-bat against Plesac, sending the dugouts into a frenzy. Reyes screamed as loud as he could, “OH, THAT A BOY!”

Straw respectfully declined Reyes’s peace offering — a high five — on his walk back to the dugout, causing Reyes to whiff the air.

Naylor hasn’t missed a beat (March 12)
Sight: The memory of outfielder Josh Naylor flailing on the ground at Target Field after suffering multiple fibula fractures and ligament tears while trying to make a diving catch in right field is still fresh in plenty of Cleveland fans’ minds. He still has tape wrapped around his lower right leg in two places, but his bat doesn’t seem to be affected by the recovery.

Naylor put on a show in his BP session on Saturday afternoon, as a few more Guardians players reported early to camp. The team hasn’t officially started formal workouts, but Naylor has already made a strong impression. He launched homer after homer on just a handful of pitches, showing that, if nothing else, his bat is ready for Opening Day.

Whether he’ll be cleared before the start of the season is unknown. The outfielder is slated to speak with media in the coming days, and he will likely give a better idea of where he stands in his recovery and what his path forward looks like. But we don’t need to hear from him to know that he has had no problem rediscovering his swing after taking some time off to heal.

Sound: Naylor had Richie Palacios and Daniel Johnson in his hitting group, and neither could refrain from making comments as soon as Naylor stepped in the cage. After just one or two pitches, Naylor smacked a homer to deep left-center field, prompting Johnson to say to Palacios, “Oh, I thought he was going to start slow.”

Just a few pitches later, Naylor destroyed another one, and Johnson yelled, “Oh, that’s gone, gone.” The two other hitters couldn’t help but become eager spectators each time Naylor stepped back in the cage.

Bieber and Plesac back on the mound (March 12)
Sight: Guardians ace Shane Bieber was back on the rubber Saturday afternoon with his close friend, Zach Plesac, who’s ready to show he can slide back up to the team’s No. 2 starter. Bieber threw just a handful of pitches in his first bullpen since camp was cleared to get underway, but he certainly reported to camp as if he were already toward the tail end of Spring Training. Bieber was able to return for two three-inning starts last September after missing the previous three months due to a shoulder injury. After an offseason of building himself back up, he appears to have put the injury in the rearview mirror.

Sound: “It’s just like first-day jitters again, being excited to watch your homies go out and do their thing.” — Guardians starter Triston McKenzie