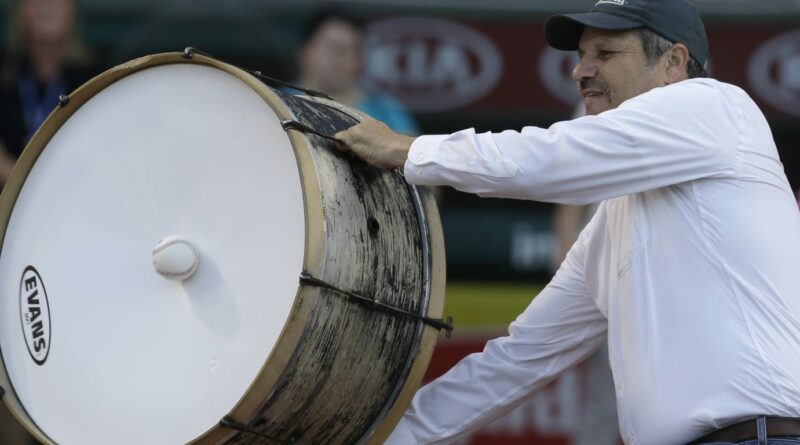 KANSAS CITY — Once again, Cleveland’s home opener will be a little quieter than it had been for the last four-plus decades, as John Adams and his famous drum will be missing.

Adams has been known as the man with the enormous bass drum in the left-field bleachers since 1973, banging it when his beloved team has a runner in scoring position or just needs a rally. But because of multiple health concerns that have piled up over the last two years, he’ll have to miss his second consecutive home opener for the first time in over four decades.

When we checked in with Adams last year, he had four broken ribs, then triple bypass surgery and then another heart surgery. His thyroid was out of whack, causing his energy levels to be even lower than expected. He had three trips to the ICU and was bedridden for an extended period of time. And while he was finally able to get back to his house in February 2021, the ailments continued to pop up.

He then broke his hip and had to have that repaired before an infection in his heel arose and knocked him out of commission. He underwent a procedure to eliminate the infection, but it’s also taken his ability to walk around – at least for the time being.

“There’s been a lot going on and it takes a lot out of you,” Adams said. “It takes a long time to heal. It’s been rough.”

Despite how challenging it’s been, Adams refuses to cave to the negative thoughts that try to creep into his head. He remains optimistic, assuring himself that he will be able to get back to Progressive Field when this is all behind him, even though it wasn’t able to happen in 2021.

“You get frustrated, but then you remember, look, I have a place to stay,” Adams said. “I have food. I have water. I have friends. There’s a lot of people who have less than that. So, do I have my pity party? Yes. I still have them. But then I slap myself out of it. And then you’re back to running on full speed.”

His plan is simple, but it’s going to take some time. He said as soon as he can get out of bed and walk, he’s going to try to build as much strength as he can to be able to move around independently. Once he feels comfortable with his progression, the first place he’ll go is the corner of Carnegie and Ontario.

“There’s nothing like being down at the ballpark,” Adams said. “Because it’s more than just the game; it’s all the people around you and all the people you see. It makes the experience of a baseball game way above just sitting at home. It’s OK to sit at home and watch it, but I would really tell people, as often as they can get down, get down and see the game. Feel the game.”

Adams is now familiar with handling a season from afar. Last year, he watched every game on television and he’ll likely do the same in 2022 until he’s able to get back in person – an experience that he can’t help but look forward to.

“I’m going to be ecstatic,” Adams said, of what his first game back at Progressive Field will be like. “I think I’ll be walking a foot taller off the ground.”

As the Guardians enter this new chapter of their franchise’s history, the team has done its best to bring all the memories and traditions of the last 100-plus years along with it. And since 1973, Adams has become a staple of the club’s customs, which is why all winter long, fans have tweeted at reporters, asking if anyone knows whether Adams will be back for the home opener in ’22.

“It just shows me I’m blessed,” Adams said. “I really am blessed to have so many people [care].”

The answer to everyone’s question is no, Adams will not be physically able to be in attendance on April 15 when the Guardians take on the Giants. But because of the fans’ investment in his health, he’s remaining optimistic that he’ll be back in the stands again by the season’s end.

“Their prayers, thoughts and good vibrations,” Adams said, “what do you think keeps me going? Tell them to keep doing it. It’s working.”