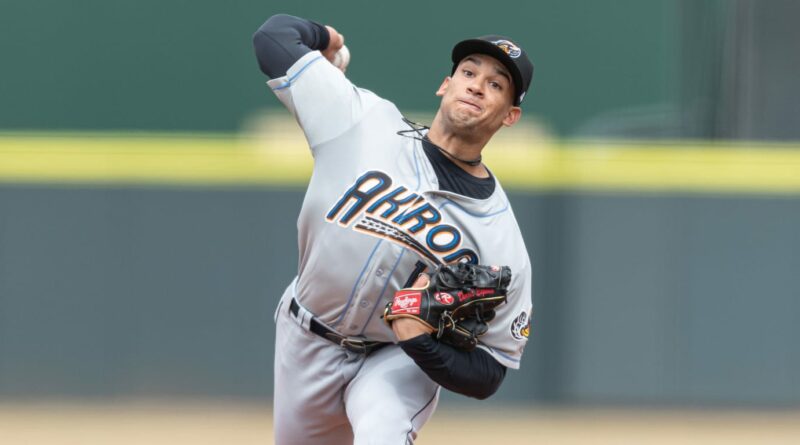 Daniel Espino keeps his mind “blank” when he’s out on the mound. Even when he’s just struck out 11 straight batters to open a game for the Guardians’ Double-A affiliate, the Akron RubberDucks.

“That’s when I’m at my best,” said Espino, Cleveland’s No. 2 prospect per MLB Pipeline and No. 52 overall. “That’s the key for me — to just be in the flow of the game and trust what I’ve been working on in Spring Training and during the offseason.”

That trust was put to the test when, after the awe-inspiring run of strikeouts to open the contest, the 12th batter Espino faced in Saturday’s 8-6 Akron victory over Bowie — No. 63 overall prospect Gunnar Henderson — launched a solo homer to put his team up, 1-0.

The homer came on a curveball, but Espino didn’t stop trusting the pitch.

“I would throw that same pitch again in that situation, 100 percent,” he said. “I liked the location of it. It’s a pitch I’ve been working on. … In the offseason, I worked a lot on my secondary pitches. The slider, the curveball, the changeup, getting more comfortable throwing those three pitches and having a really good arsenal with those three pitches.”

Espino’s fastball hits triple digits on the radar gun and has run to it. It’s almost unhittable. What Espino has focused on with his secondary offerings could take him from his status as one of the most electric pitchers in the Minor Leagues to one of the most dominant.

Following the homer, Espino demonstrated his poise and his unwavering trust in the curveball, as well as his other secondaries, fanning the next batter he faced, first baseman Andrew Daschbach, to end the fourth inning. From there, Espino proceeded to strike out the first two batters he faced in the fifth, before working around a double and a single to retire the side on a grounder back to the mound.

It was an unforgettable performance: five innings, two runs on three hits with no walks and 14 strikeouts. Along with Phillies prospect Andrew Painter, the 14 strikeouts mark the most in any Minor League game thus far in 2022. Painter also notched his performance Saturday night, doing so for Single-A Clearwater.

But it’s that “no walks” part that was most pleasing to Espino, who is trying to lower his walk rate, which was 10.4 percent between Single-A Lynchburg and High-A Lake County last year.

“The most important thing for me wasn’t the strikeouts,” he said. “If I’m just able to attack hitters and keep them off the bases — hits are going to happen, balls are going to get hit, that’s part of baseball — but if I’m able to control what I can control, and being able to limit walks, that’s the best thing for me and that’s the best thing I can take away from this outing.”

With Espino utterly overpowering hitters with his fastball and continuing to improve the rest of his repertoire, it’s not hard to imagine fans in Cleveland starting to wonder how soon they might see him on the mound at Progressive Field.

But that’s where Espino’s ability to keep his focus — what he calls his “20-20 vision” — comes back into play.

“It’s cool to be able to be in this organization,” he said. “I don’t take that for granted, and that’s what keeps me motivated to be my best, not only when I pitch, but also the days in between — every practice, every bullpen. Just be out there and be me. And when that time comes, be ready for that time.”

If Espino continues to wow us the way he did in Bowie on Saturday night, that time may be soon. But whenever it comes, it’s not lost on him what he has in his right arm.

“I feel that I was gifted by God,” he said. “I’m just here to show what He can do, and that’s pretty special. I’ve been blessed with this arm, and to be able to do what I can do with a baseball, I think that’s just Him working in me.”