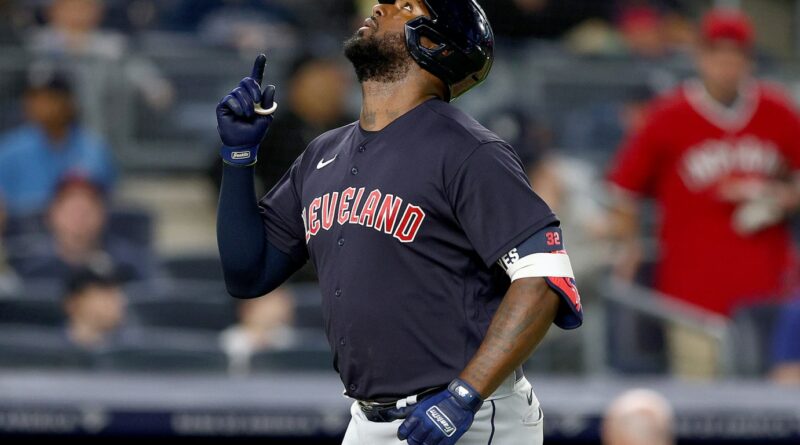 NEW YORK — The surging Guardians ran into an Aaron Judge-sized wall Friday night, beginning a challenging 10-game road trip with a series-opening loss in the Bronx. But within their 4-1 defeat to the Yankees came signs of a big part of their lineup breaking out in a big way.

The most encouraging swing on what was a slow night for the American League’s leading offense came from Franmil Reyes, whose fourth-inning opposite-field solo homer accounted for Cleveland’s lone run against Jameson Taillon and two New York relievers. It was the second homer in as many days for Reyes, signaling the slugger may be starting to find his swing after a slow start.

“That’s a good sign,” manager Terry Francona said. “When he’s hitting the ball to the right side, and you’re going to get rewarded here for that. That should help loosen him up and make him feel better about himself, because when he’s dangerous, we’re different.”

Consider it a welcome development for a Guardians offense that entered Friday leading the Majors in runs per game and the AL in batting, slugging and hitting with runners in scoring position, despite getting little out of Reyes in the early going. The hulking slugger is now 10-for-51 (.196) with two homers and a 20:2 strikeout-to-walk ratio in his first 12 games, after hitting .254 with 30 homers and an .846 OPS in 2021.

It’s an early-season slump the Guardians have been able to weather thanks to white-hot starts from Steven Kwan, Jose Ramirez and Owen Miller at the top of the order. But Reyes’ light-tower power gives their contact-heavy lineup another dimension, and they know they need to get him going for their offense to click on all cylinders. Francona and Reyes were particularly encouraged by the way both of Reyes’ homers went to the opposite field; in his career, more than three-quarters of his homers (72 of 93, 77 percent) have gone to either center or right field.

“I’m trying to remember who I am when I’m a good hitter, what part of the field I use more,” Reyes said, noting how Yankee Stadium’s hitter-friendly dimensions made him pull-happy in the past. “I’m trying to let the ball beat me, [get deeper in the strike zone], a little more. I think that’s the key.”

The flip side of that power is the swing and miss, which Reyes has been prone to high rates of his entire career. Less expected Friday was the way the Guardians whiffed around him. Reyes accounted for three of Cleveland’s season-high 15 strikeouts against Yankee pitching, including seven straight set down by righty reliever Michael King between the sixth and eighth innings.

“If you’re on their side, I can see why they’re excited,” Francona said. “That’s pretty good stuff in three innings. That was impressive.”

Said Reyes: “He’s a very good pitcher, but not unhittable.”

In the end, it was an out-of-character showing from a Guardians team that entered the game leading the Majors in team contact rate, led by Kwan (98.6 percent contact rate entering Friday, first in MLB), Miller (90.4 percent, fourth) and leadoff man Myles Straw (88.9 percent, eighth). Reyes and his 29.8 percent career strikeout rate are an exception in this lineup, but the Guardians will take it if it comes with the consistent power he’s shown he’s capable of in the past. His big swing Friday hinted more might be on the way.

“For the most part, we do put the bat on the ball,” Francona said before the game. “I think it’s refreshing. I love it. With two strikes, guys are shortening up a little bit, fouling off tough pitches. Either earning another pitch and throwing it in the opposite field, sometimes you get a hit that way.”