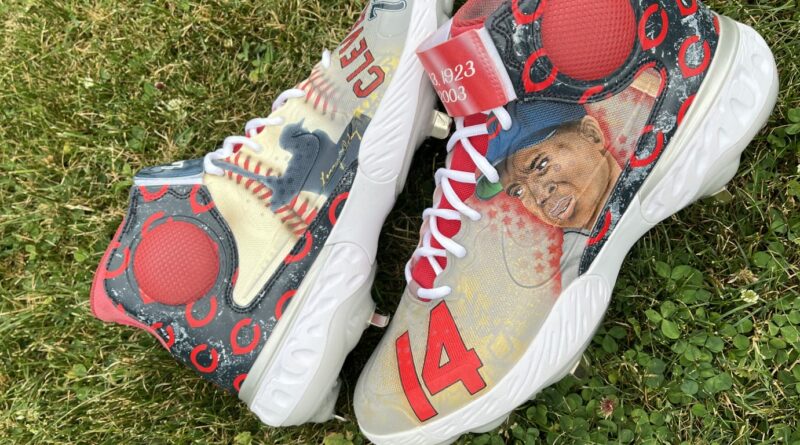 CLEVELAND — Jonathan Hrusovsky has done a lot of cleat designs, but he’s never done one quite like this.

On Saturday, Hrusovsky will team up with Guardians second baseman Andr?s Gim?nez to host a cleat design competition for those in attendance. Fans will have the opportunity to draw a design and one lucky winner will have his or her design printed on a pair of cleats for Gim?nez to wear during Spring Training.

“I still get goosebumps sometimes when I go to a game, regardless if it’s here or somewhere else and I see a player wearing cleats [I designed],” Hrusovsky said. “So I can only imagine a child being able to see that and being able to say, ‘Hey, I designed that cool design for that player.'”

Hrusovsky is a custom artist from Cleveland, who has been doing designs for a handful of athletes for the past few years. He still remembers sitting on his couch, watching the NFL one January, realizing the new fad was right up his alley. Players were expressing themselves through designs on their cleats — something he could do masterfully. With the Super Bowl just weeks away, he knew he didn’t have the time to reach out to football players. That’s when his inner Cleveland fan told him to reach out to Carlos Carrasco.

In 2017, Hrusovsky and Carrasco teamed up to create Hrusovsky’s first design for a Cleveland player. From there, word started to spread that he could make shoes or gloves for anyone who was interested. Guys like Carrasco, Jos? Ram?rez, Mike Clevenger and now Gim?nez have all turned to Hrusovsky for designs. And one in particular for Clevinger will forever stand out as Hrusovsky’s favorite.

“I think it was back in ’18,” Hrusovsky said. “That year we had Carrasco, [Trevor] Bauer, Clev and [Corey] Kluber all have that milestone of 200 innings, 200 K’s. So, the Hall of Fame called for something from each one of those players and Clev gave over his cleats and to this day, they’re still in Cooperstown. A nice, simple red pair that has Lilo and Stitch and Moana, too.”

Gim?nez wanted to represent Venezuela, Cleveland and his family in his cleats for last year’s All-Star Game, so he paired up with Hrusovsky for the first time to bring his vision to life. It wasn’t long after that they realized this could be done again in the future — but with fan involvement.

Gim?nez was specific in his requests when it came to his cleats, which makes the design process much easier, according to Hrusovsky. That shouldn’t be a problem when it comes to fans’ designs this weekend.

Those who are interested in participating in the cleat design competition will be able to sit down, draw their design on a printed-out cleat template and submit it for review. Gim?nez will find time during both the morning and afternoon sessions to pop by, weigh in on the designs and help those who are drawing. At the end of the night, Hrusovsky and Gim?nez will review the submissions and will determine a winner. That person will be contacted shortly after Guards Fest and will receive a pair of cleats with their winning design, on top of watching the Guardians second baseman sport the look during Spring Training.

“The kids are the future of the game, regardless of whether they play baseball or softball it does not matter,” Hrusovsky said. “Even if they don’t want to play. Maybe they’re inspired by creating something and maybe they’ll work for Adidas or Nike one day and be like, ‘Hey, my designs are gonna be worn by professional athletes.’ It’s just really cool, and it helps the game, too. It helps it grow.”

Hrusovsky has done plenty of fan design competitions in the past, but none have ever resulted in a professional athlete sporting the winning design. And the artist is looking forward to working with someone like Gim?nez, who is excited about connecting with his community in a way few have done in the past.

“It shows [a player’s] personality,” Hrusovsky said. “It shows who they are. It shows that they want to do good, they want to be part of the team and the community that they’re with. So seeing Andr?s want to help and I just found out he likes to dabble in art himself … so I just think it’s amazing.”