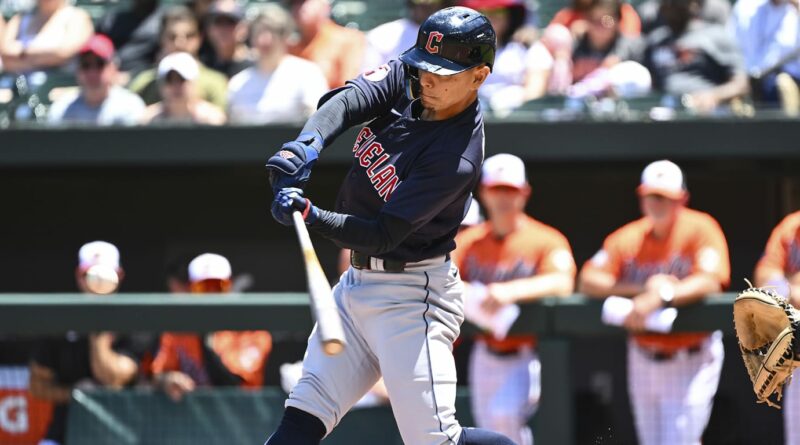 BALTIMORE — The young, streaky Guardians earned their first series win in the Charm City in more than four years on Sunday, using one big swing and air-tight pitching to squeeze out a hard-fought 3-2 victory over the Orioles. Their fifth win in six games pulled Cleveland back within a game of .500 ahead of its upcoming seven-game homestand against the Rangers and A’s.

That was the case all weekend this time around at Oriole Park. Here are three observations from Sunday’s rubber game victory:

The rotation keeps rolling
That Aaron Civale came out of his bullpen Friday feeling good was welcome news for a Cleveland rotation inching closer to full strength. But results-wise, the staff has hardly missed a beat since Civale landed on the injured list with a glute issue after his last start on May 20. This weekend provided three more examples.

The Guardians received a vintage Shane Bieber performance Friday, seven solid innings in a historically hard-luck loss for Triston McKenzie on Saturday and six gutsy innings of two-run ball from Zach Plesac on Sunday, before their vaunted bullpen handed the rest. Plesac didn’t walk a batter and struck out eight despite eliciting 27 foul balls on 99 pitches, reaching back to fan Jorge Mateo and Austin Hays en route to escaping an especially hairy two-on, no-out jam in the fifth.

“That was crunch time,” Plesac said. “Those are the big moments. I needed to step up.”

Said Francona: “When he got tested, he reached back and got some fastballs we hadn’t seen, but he wasn’t just throwing them. He was commanding them and competing. I think that will do him a world of good.”

Entering Sunday, the rotation’s 3.02 ERA in 18 games since May 14 was fourth-best in baseball and third-best in the American League.

Morgan growing into key role
Speaking of that ‘pen, it’s thriving in large part because of the versatile Eli Morgan, who has pitched in several roles since debuting last summer. Emergency starter. Fifth starter. Long reliever.

Now he’s growing into a fireman, someone Francona is becoming more comfortable inserting into important situations regardless of inning. And he’s enjoying a lot of success.

“He deserves it,” Francona said. “At the end of spring, I said I hoped he becomes a weapon. That’s exactly what he is right now, and that’s valuable.”

Francona tabbed Morgan for one big out in the eighth inning Friday, when the righty struck out the red-hot Hays to tamp out Baltimore’s three-run rally after Bieber departed. Then Francona threw him right back in the fire Sunday, calling on Morgan to extinguish a two-on, one-out situation in the seventh inning of a one-run game. Morgan needed just five pitches to coax popouts from Cedric Mullins and Hays to end the threat. He then worked a scoreless eighth to set up Emmanuel Clase’s ninth save.

All told, Morgan owns a 2.16 ERA and 32 strikeouts in 25 innings and hasn’t allowed a run in eight games.

“It’s good to know he wants me to feel good and he’s not just going to run me out there whenever,” Morgan said. “I’m getting used to the shorter outings and my arm is bouncing back really quick. So I should be able to do something like that more often.”

Gim?nez bringing it on both side of the ball
The hottest Guardians hitter at the moment? That’s Andr?s Gim?nez, who continues to quietly emerge as one of the game’s more valuable second basemen … only less quietly by the day. Rocketing a three-run homer off Dean Kremer to open Sunday’s scoring, Gim?nez went deep for the second time in as many games. He also launched a 418-foot solo shot on Eutaw Street on Saturday.

Gim?nez’s elite defensive skills were on display too, when he expertly began a crucial double play on a slow roller deep in the shift to help Clase shore up the ninth. The bang-bang play required a shifted J?se Ram?rez to turn it at the second base bag and a nifty Owen Miller scoop at first on the return throw.

“In the shift, I need to move my entire body in the other direction [away from second]”, Gim?nez said. “We did a tremendous job on that play.”