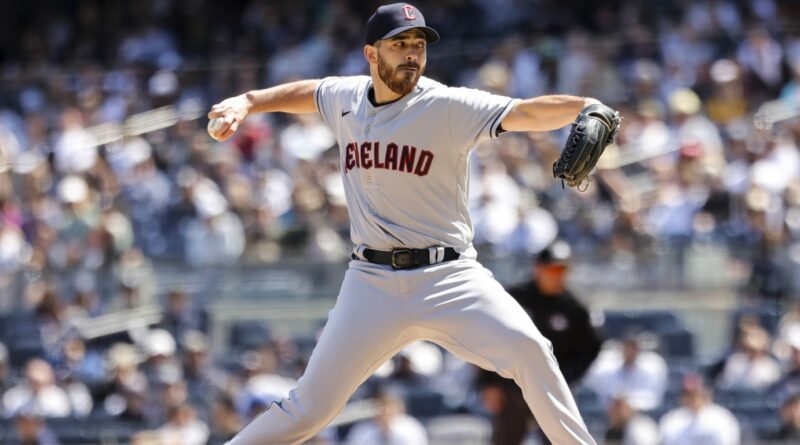 NEW YORK — It was an emotional, challenging and ultimately (they hope) motivating weekend in the Bronx for the Guardians, who arrived on Friday alone atop the American League Central and left a game below .500 after Sunday’s 10-2 loss to the Yankees.

Cleveland succumbed to an array of issues one day after fan altercations muddied their frustrating walk-off defeat Saturday, from sloppy outfield play and an uneven Aaron Civale start to uncertainty regarding breakout rookie Steven Kwan. But the primary issue was New York starter Gerrit Cole, who cruised for 6 2/3 shutout innings behind a bevy of run support. The resulting sweep at the hands of the Yankees marked the Guardians’ first since May 4-6, 2018.

“Coming into the game, Cole hadn’t been commanding terrific and had been pitching behind more than he’s used to,” Cleveland manager Terry Francona said. “Today he didn’t. His stuff is still really good, and when he’s pitching ahead he can be a handful. You saw that.”

Needing to turn the page quickly, the Guardians now head west to continue their difficult 10-game road trip with visits to the Angels and A’s. Here are some takeaways from their weekend in the Big Apple:

1. This is a streaky group
Win some, lose some. Sure. But the Guardians are making a habit of stringing both outcomes together. This weekend’s three losses came on the heels of an emphatic three-game sweep of the White Sox. Prior to that, they lost three straight to the Giants after winning four straight against the Royals and Reds, and they dropped the first two games of the season at Kansas City. Cleveland entered the weekend leading the AL in team hitting, slugging and contact rate, then scored just seven runs and struck out 35 times in the three-game set.

Through 15 games, the Guardians scored double-digit runs four times and have been held to one run or fewer six times.

Some of that inconsistency could be connected to the mini COVID-19 outbreak the club has been weathering. The team is almost out of the woods on that end, having welcomed Cal Quantrill and Owen Miller back to the roster this weekend. Still, Franmil Reyes is yet to really get going and the rest of the lineup went cold around a quiet weekend from Jose Ramirez.

But it’s also indicative of the types of ups and downs not entirely unexpected from the youngest roster in baseball.

“We talked a lot in Spring Training about creating opportunities for young guys,” general manager Mike Chernoff said. “You never know how that’s gonna play out, right? With young guys, there’s a lot of volatility. But we want to create opportunities. Early in the season, we’ve seen both the highs and some of the growing pains that naturally come with having a young team, but it’s exciting to watch these guys. We know we’re going to have growing pains … at the same time, we’ve seen some really bright spots with young players.”

2. Kwan’s health comes into focus
The best example of those bright spots is Kwan, who has hit himself into a rookie sensation early this season with his relentless contact skills. Now the Guardians are hoping they won’t need to weather much time without him.

Though Kwan was cleared of any head injuries after crashing hard into the left-field wall Saturday, he exited Sunday’s series finale in the third inning due to right hamstring tightness. Francona called the move “preventative,” tentatively labeling Kwan “day to day.”

But the Guardians will need to see how Kwan’s muscle responds to the club’s five-hour flight to California before drawing any further conclusions or determining whether the issue will linger.

3. Can they get Civale right?
While the Guardians’ rotation has generally fared well in the early going, Civale’s struggles from the second half of last season have carried over. He allowed six runs in three innings Sunday, including Anthony Rizzo’s two-run homer and a run-scoring double to Joey Gallo that put the game out of reach early.

Since coming back from a sprained middle finger last September, Civale is 2-5 with a 5.63 ERA in nine starts. He’s also throwing his four-seam fastball nearly a full mile per hour slower than his 2021 average, though it did tick up Sunday (90.7 mph average).

Said Francona: “If we continue to get him reps and continue with health, he’s going to be really good. It just seems like things that can go wrong, have. He’s had a lot thrown at him. Nothing that’s going to derail him, but it hasn’t helped.”