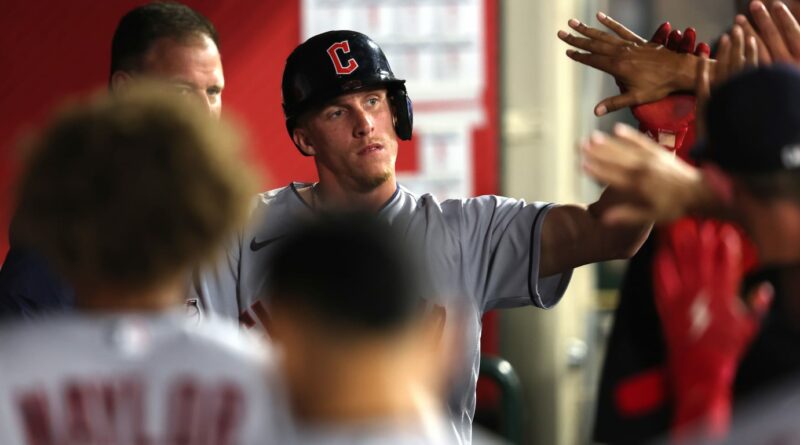 ANAHEIM — The Guardians haven’t gone through a skid like this since the beginning of July last season.

Tuesday night’s 4-1 defeat to the Angels at Angel Stadium extended Cleveland’s losing streak to five games after the team’s attempt to find some consistency with a sweep of the White Sox last week. But a rough series in New York and two rocky showings in Anaheim have the Guardians at their lowest point since a nine-game losing skid nine months ago.

Cleveland was held to just two hits through the first eight frames on Tuesday, before a last-ditch effort in the ninth resulted in a single, double and one run to avoid being shut out for the second consecutive night.

We can state the obvious that the team needs to start stringing hits together to right the ship — but instead, let’s take a look at three other factors that have played a large role in the offense’s continued struggles:

Hard-hit rate is alarmingly low
When a team’s Baseball Savant page has more blue areas than red, that’s a sign that it’s going through tough times. Cleveland ranks among the lowest in the league in crucial categories like expected batting average (.242), expected slugging percentage (.397) and average exit velocity (87.6 mph). But the most problematic stat might be its low hard-hit rate (34%), which ranked near the very bottom of the Majors entering Tuesday.

The Guardians have been able to put plenty of balls in play and have kept their strikeout numbers down, considering the offensive difficulties they’ve had. But the team has struggled to barrel pitches and make hard contact. A hard-hit ball is defined as anything that clocks in at 95 mph or higher. And it goes without saying that the weaker the contact, the easier the out.

Aside from Owen Miller (who owns a 53.6 hard-hit percentage), the team doesn’t have any other hitters who rank favorably in this category. And if the Guardians are looking to quickly turn things around, it’s going to need more than one bat making solid contact.

Cleanup spot has gone ice cold
Speaking of difficulties making contact, the Guardians currently have a big hole at arguably the most crucial spot in the lineup: Cleanup. Franmil Reyes has proven in his time in Cleveland that he can be extremely streaky at the plate — and right now, he’s hit a cold patch.

Reyes has gone 0-for-his-last-13 with nine punchouts, punctuated with a whopping four-strikeout night on Tuesday. And for a team that hasn’t struck out too often, Reyes has caused the strikeout percentage to skew higher with his 27 K’s — tied for the most in the Majors with Atlanta’s Dansby Swanson.

Strikeouts are a large part of today’s game, especially with power hitters who are often swinging for the fences. But when the homers and hits aren’t mixed in regularly, it becomes quite a problem. And for now, the Guardians are going to hope that Reyes can turn hot just as quickly as he went cold.

“There’s been a few at-bats where he chased down soft,” manager Terry Francona said of Reyes’ rough patch. “Yesterday he chased up hard. Just got to get to a point where you’re swinging at pitches you can handle. Sometimes that’s easier said than done.”

They’re missing Kwan
When only three players on the Guardians’ roster boast at least one red category on Baseball Savant, it’s hard to continue on without one of them. Miller was missing at the start of this losing skid due to a positive COVID-19 test and as soon as he returned to the team, early-season standout Steven Kwan was sidelined with left hamstring tightness.

The Guardians are expected to know more on Wednesday about Kwan’s status. The hope is that he’ll just need another day or two before returning to the lineup, but there’s still a chance he’ll have to spend a short stint on the injured list. And even though he only has 14 big league games under his belt, he’s proven to be one of the most reliable hitters in the lineup. Despite his low hard-hit rate (20%), he’s still manufactured a .341 average with a .956 OPS.

If the Guardians can get Kwan back in the lineup, find a way to ignite Reyes’ bat and make a little better contact at the plate, there’s no reason the team won’t find its way back in the win column.

“Cleveland is down a little bit the last couple days, but don’t be deceived, they’re a very good ballclub,” Angels manager Joe Maddon said. “They can jump up and bite you at any time. Their bench is loaded with left-handers. They’re just a really good team.”