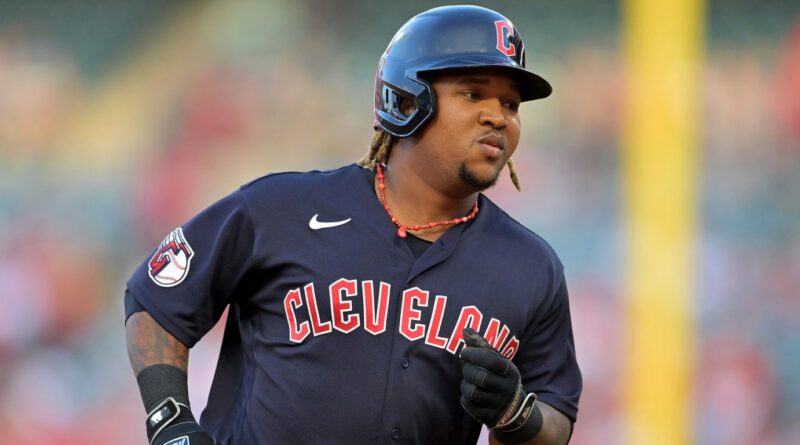 ANAHEIM — For the Guardians to be successful, they know they need offense from both Jose Ramirez and Franmil Reyes. But that’s not what they’ve gotten so far.

Ramirez recorded his 18th career multi-homer game in the Guardians’ 9-5 loss to the Angels on Wednesday night at Angel Stadium, but there’s only so much he can do on his own, as the team extended its losing streak to six games. While it’s obvious that both his and Reyes’ power bats are needed to help provide run support for a shaky offense, it’s become even clearer that Reyes’ struggles can cause problems for not just him, but Ramirez, too.

How can that be the case? Having the threat of a big slugger right behind Ramirez in the lineup forces opponents to make better, more hitter-friendly pitches to Ramirez. When that threat is taken away with an ice-cold bat behind the team’s best hitter, suddenly opponents are able to pitch around Ramirez to get to an easier out in Reyes.

At the start of the season, it was assumed that Reyes could be just as dangerous as we’ve seen him in his hottest stretches over the last few seasons. And with the confidence he built by picking up a couple of hits in the first four games, the threat was still there behind Ramirez. But since he’s fallen into a deep slump since Sunday, Ramirez’s numbers started to fall, too.

And this is just naming a few of the obvious differences. Sure, Ramirez and Reyes could just go cold at the same time and it’s all a coincidence, but manager Terry Francona wanted to find that answer by moving Reyes down in the order for Wednesday’s matchup and putting the team’s hottest bat in Owen Miller behind Ramirez, so hopefully the All-Star third baseman would see better pitches. The result? Two homers for Ramirez.

“I think Josey is a good hitter, too,” Francona said. “But the idea is that we want them to have to pitch to him, because if they don’t, we want it to hurt them. The way Owen’s swinging the bat, I do think that will help.”

Maybe the Guardians can work around Reyes’ struggles and prevent them from affecting Ramirez’s production as much as possible. But that leaves one question: What can they do about Reyes?

Reyes struck out for the second time of the night in the third inning, extending his strikeout streak to eight consecutive plate appearances, dating back to Monday’s series opener. This is the longest streak for a Cleveland player since Mike Napoli had eight straight punchouts in 2016, according to the Elias Sports Bureau. Reyes now leads the Majors with 30 K’s and has been fanned in each of his 16 games this year — the second longest streak to start a season in Cleveland history (and it’s still active), trailing just Rip Hagerman’s 19-game stretch all the way back in 1914.

The Guardians’ are ready to attempt to find an answer for Reyes’ problems. Francona said he’s planning to pencil Reyes in the outfield on Thursday, rather than DH, to give the slugger something else to focus on than just hitting. Francona attempted this method last week against the White Sox and Reyes launched his first homer of the season in that game before smacking another long ball the next night.

Although Reyes denied that playing the outfield has any impact on his bat, he also said that he trusts Francona’s methods and can see how that correlation would make sense. It’s worked once before, can it happen again? The Guardians are hoping that the answer will be yes.

“I don’t think he’s real thrilled right now,” Francona said. “He’s having a tough time. We’re going to play him in the outfield tomorrow. We did that the other day just to kind of make him think about the game and not just dwell on hitting all the time. Hopefully that will help.”