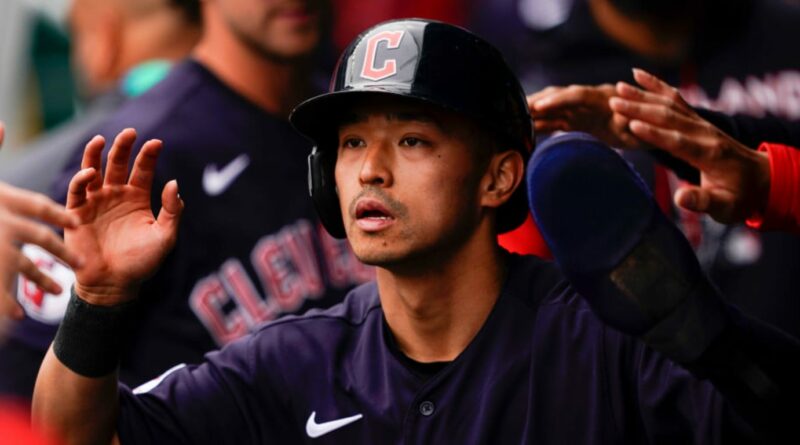 KANSAS CITY — Is Cooperstown calling yet?

Steven Kwan has found himself in the brightest of all spotlights after a strong opening series to his first big league season, punctuated with his first career triple, two more walks and a little more history in the Guardians’ 10-7 win over the Royals at Kauffman Stadium on Monday.

With his six singles, two doubles, one triple and five walks since Opening Day, Kwan has reached base 15 times in his first four MLB games — the most any player has logged in his first four career games since at least 1901.

But this is just one of the laundry list of fun facts and accolades Kwan racked up over the weekend. Let’s break down 24-year-old outfielder’s first big league series.

What he’s done
At this point, it may be quicker to list what he hasn’t done, but in case you missed the Kwan mayhem thus far, let’s recap:

o Through his 19 plate appearances, Kwan has made 26 swings and has yet to miss on a single one. He’s just one of three qualified batters remaining in the Majors who have yet to whiff at a pitch, along with Eloy Jimenez (18 swings) and Ryan Jeffers (12 swings).

o He hasn’t struck out in a game since Sept. 26, 2021, with Triple-A Columbus, including Cactus League play.

What they’re saying
Kwan knows the uproar he’s caused on social media with teammates, fans and other Cleveland-related accounts, prompting jokes about his MVP-worthy season and Hall-of-Fame-worthy career even though both have lasted just a handful of hours. But that humor is only sparked because of the unbelievable achievements he’s been able to accomplish in less than a week’s time.

Maybe for a brief moment on Monday, he appeared human, as he dropped a fly ball in left field at a critical time in the seventh inning, which helped the Royals cut their deficit to 6-5. But whoever thought he’d actually come back to Earth was wrong, as he stepped to the plate with the bases loaded and served a bases-clearing triple into right field, leading to his enormous roar in celebration at third base.

“He was trying to do a little too quick and it hit the heel of his glove,” Guardians manager Terry Francona said of Kwan’s drop. “But then his at-bat was terrific. I mean, they tried to elevate yesterday, they tried to throw him offspeed today. His at bats are really, really good. That’s stating the obvious.”

And after knowing very little about him entering Opening Day, Kwan even had the Royals’ clubhouse talking by the end of the series.

“He’s a tough out,” Royals manager Mike Matheny said. “You can tell that already. Guys that don’t swing and miss a lot, figure out how to make hard contact, tough to strike out. That’s exactly what he did this whole series.”

What it means
We’ll say it again: this is a very small sample size. However, it shows that the scouting report on the Guardians’ No. 15 prospect is not only true, but translating to the big league level.

So often rookies are overwhelmed in their first few games. But in a time when the game is moving faster than it ever will as he finds his place in the Majors, Kwan has shown a few unteachable qualities that can only bring optimism about his future.

As we said earlier, his hand-eye coordination is unmatched and his patience at the plate is elite. He demonstrated Monday that he’s able to turn the page quickly after mistakes and his speed has already helped him stretch singles into doubles.

What the future holds for Kwan is unknown. But what we know at this point is the Guardians may have found an answer to their outfield problems that they’ve been searching for over the last few years.