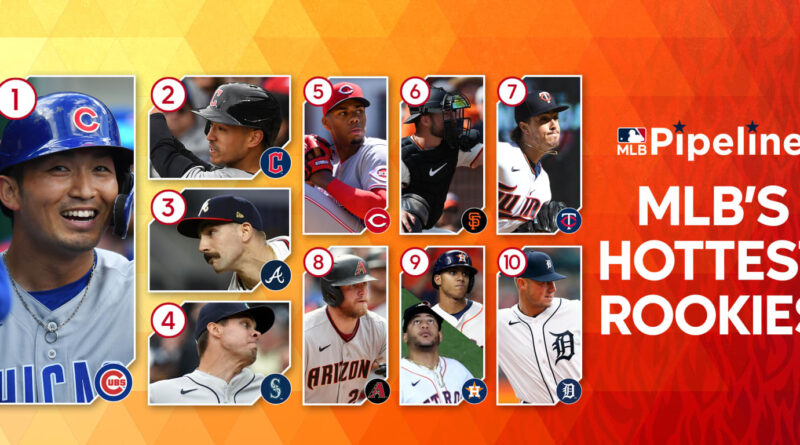 Welcome to the first Rookie Hot List of 2022, where we… well, we do exactly what it says in the name. This is a look at the 10 (or 11) rookie Major Leaguers who have been the hottest on the field since the season started. As the year goes on, we’ll check in every two weeks, and of course next week’s list could have 10 completely different names.

All statistics are through Sunday’s games.

1. Seiya Suzuki, OF, Cubs (not eligible to be ranked on Cubs Top 30 prospects)
There was some uncertainty as to how Suzuki’s gaudy numbers in NPB would translate to the United States. And if we’re being reasonable, there still is. But boy, you’d have a hard time finding anything not to like so far. Suzuki finished the weekend with a .400/.543/.960 line that includes four home runs, 11 RBIs, and nine walks. He has struck out nine times in 35 plate appearances, but even that isn’t excessive these days – especially if you’re averaging a homer almost every other game.

2. Steven Kwan, OF, Guardians (Cleveland No. 15 prospect)
Kwan was one of the best stories of the season’s first couple of weeks, showing otherworldly plate discipline with his streak of 116 consecutive pitches seen without a swing-and-miss. Kwan has yet to homer in the big leagues, but when you have a 4:1 walk to strikeout ratio, and a .541 on-base percentage, it’s hard to worry too much about power.

3. Spencer Strider, RHP, Braves (Atlanta No. 2 prospect)
Two years ago, Strider threw a total of 12 innings for Clemson in his return from elbow surgery the year before. Twelve months ago, he was a few weeks away from his professional debut with Single-A Augusta. Today, he’s racking up innings in relief for the Braves, earning a little more trust with every outing. Despite not making a start, he’s second among all rookies with 11 strikeouts in nine innings, with a 1.00 ERA and 1.00 WHIP thanks to a mere three hits allowed.

4. Matt Brash, RHP, Mariners (MLB No. 97 prospect)
Brash dominated hitters in his first full professional season, but even so, his big league debut has been impressive. He entered the year with a grand total of 55 innings in the high Minors, and yet has more than held his own against two of the American League’s best teams in the Astros and White Sox. He’s tallied 11 strikeouts (admittedly against seven walks) in 10 2/3 innings, and allowed only six hits in that time.

5. Hunter Greene, RHP, Reds (MLB No. 22 prospect)
If this were a hot list in the sense of Q rating, Greene might well be at the very top. As it is, he’s certainly worth taking note of. He’s racked up 13 Ks against just two walks in 10 1/3 innings over two starts, both on the road against two of the best offenses in the Braves and Dodgers. He has been touched for three homers and five runs, or else he’d rank even higher. But there’s no more must-watch rookie pitcher in the game than Greene.

6. Joey Bart, C, Giants (no longer eligible to be rated as a prospect)
If it seems like we’ve been waiting for Bart’s breakout forever, we kind of have. This is his third season with some time in the big leagues, and his fourth year entering the season as a top-50 prospect. But it appears the breakout is in fact here. Bart, who began the year as our No. 2 Giants prospect and No. 31 overall, is showing his plus power with an early .273/.385/.591 line, and he’s always gotten good reviews for his work behind the dish.

7. Joe Ryan, RHP, Twins (MLB No. 96 prospect)
We got a taste of what Ryan could do last summer in five very effective starts, and he’s doing it again early in 2022. He’s not as flashy as Brash or Greene, but he throws strikes and still gets swings and misses even at 91 miles per hour. Ryan has a nifty 2.70 ERA in 10 innings over two starts and was simply brilliant against the Red Sox on Friday. If you wanted to make a case he should be ahead of both of the other starters on this list, you very well might have a case, but we’re giving them points for handling extremely tough opponents and environments, and doing it in their first and second big league starts.

8. Seth Beer, OF, Diamondbacks (Arizona No. 12 prospect)
There’s a bit of a logjam with some of the hitters down at the bottom of the list here, but these are subjective rankings. And when your name is Beer, and you hit a walkoff homer on National Beer Day, you get a bump. Them’s the rules. Beer has hit, well, everywhere – dating all the way back to his freshman year at Clemson. So it’s not surprising he’s hitting in the Majors. He boasts a .381/.435/.571 line through eight games, with the aforementioned walkoff draft – er, blast.

9. Jeremy Pena , SS (Houston No. 1 prospect) and Jose Siri, OF (Houston No. 14), Astros
The Astros just keep churning out hitters. If you read any coverage of the Carlos Correa saga this spring, then you almost certainly read Pena’s name as someone they believed could step into Correa’s position admirably. He has certainly done so, with a .345/.375/.621 line in the early going. Siri isn’t playing every day but is also raking to the tune of .333/.400/.556. He’s already walked more times (twice) in 20 plate appearances in 2022 than he did (once) in 49 PAs last year.

10. Spencer Torkelson, Tigers (MLB No. 4 prospect)
Did we list the two Astros as a package deal just so as to squeeze Torkelson in? Who’s to say? But the former No. 1 overall pick has found his footing after going 0-for-10 over his first four big league games. He’s up to .240/.387/.520, showing the power and plate discipline that he’s had throughout his career. Torkelson’s bat got him drafted and propelled him through the Minors. There’s every reason to bet on it keeping him in the Majors for a long time.