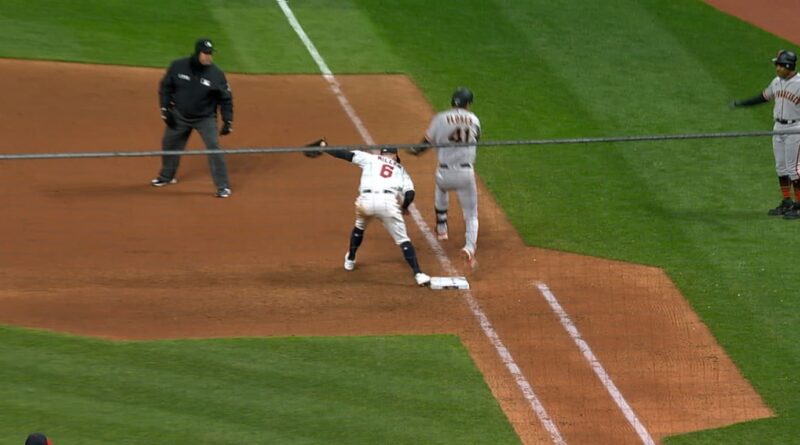 CLEVELAND — Guardians manager Terry Francona has said the same thing since the beginning of Spring Training: With youth comes growing pains. And the club witnessed that firsthand in Saturday’s 4-2 loss to the Giants at Progressive Field.

The Guardians needed a double play. Reliever Nick Sandlin worked himself into a one-out, bases-loaded jam in the eighth inning following two singles and a walk with the score knotted at 2. And for a brief moment when Wilmer Flores hit an 85 mph one-hopper to second baseman Ernie Clement’s backhand, it appeared as though the Guardians got what they desperately needed.

Clement flipped the ball to shortstop Amed Rosario, who recorded the out at second. As Rosario dragged his foot across the base and angled himself toward first to make the throw to complete the double play, he realized no one was covering the bag.

Owen Miller had broken in toward the mound assuming the ball was going to reach the outfield grass. In that case, he would’ve needed to be near the center of the infield to be the cutoff man for the throw to the plate. But instead, Clement made the play and Miller found himself out of position.

“We talked a little bit,” Francona said. “That’s one of those things where I want to make sure we talk to him and we don’t just beat him over the head because we’re moving him around. Just tried to explain, ‘Hey, slow down. Think about what your priorities are.'”

“Yeah, my footwork just got a little bit mixed,” Miller said. “I took a wrong step and then I was over a little bit on a righty. … It just took me a little bit longer than I expected to get back to the base.”

Because the Guardians couldn’t turn the twin killing, a run scored on Flores’ fielder’s choice. A second run then came across after Sandlin threw a wild pitch.

“Those are things that are going to happen from time to time,” Francona said. “Hopefully, it’s not every night. I just think with youth, there’s going to be some growing pains sometimes.”

Aside from being a young player, Miller is also relatively new to this position. He didn’t start getting time at first base until last year and has seen the majority of his playing time at that corner so far this season. He takes as many ground balls that he can at first base before games to continue to get more comfortable — a transition that isn’t so simple to make at the big league level.

“I guess there was some ups and downs last year,” Miller said. “But I’ve always tried to keep a level head and listen to [infield coach Mike Sarbaugh] and keep a positive attitude and always try to get better each day.”

That positive attitude has translated into extreme production at the plate. On Saturday, Miller set a career high by reaching base four times and recorded an extra-base hit (a double in the fifth inning) for the sixth straight game. Miller leads the Majors in batting average (.560), on-base percentage (.586), slugging percentage (1.080), OPS (1.666) and doubles (seven).

Even if the Guardians have to go through some growing pains this season, they’ll need players to be able to turn the page on miscues quickly, like Miller has thus far, in order to find ways to remain successful.

“I always like to say, ‘Don’t let early numbers fool you, good or bad,'” Miller said. “I just try to keep a level head and get to work each day and focus on the next day’s pitcher.”