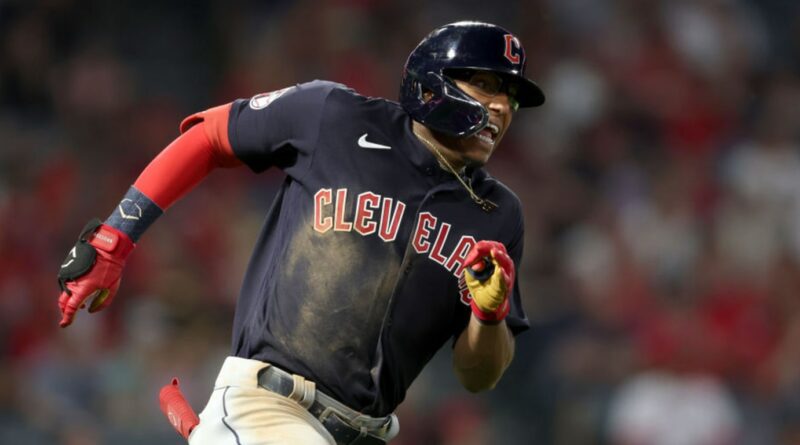 ANAHEIM — Monday night’s 3-0 loss to the Angels at Angel Stadium was mostly one to forget for the Guardians. The offense was held to just three hits and Shane Bieber’s solid performance was tarnished by two homers from Angels leadoff man Taylor Ward. Yet, it was a night that No. 18 prospect Richie Palacios — and his parents — will always remember.

Just 24 hours prior to first pitch, Palacios was in Indianapolis, wrapping up a series with Triple-A Columbus, having no idea that he would soon get the call that he’s dreamed of receiving since he was a little kid.

It was inevitable that Palacios would get a chance at the Major League level at some point this season, but the end of April seemed ambitious, considering he didn’t get off to the hottest of starts at the plate with Columbus. But when Steven Kwan started experiencing left hamstring tightness in New York on Sunday, the team knew it needed an extra body in the outfield. That’s when Palacios was called into manager Andy Tracy’s office.

“He said, ‘You’re going to the big leagues,'” Palacios recalled, with a big grin. “I was extremely excited. Started clapping.”

He immediately picked up his phone to call his parents, who were back in New York after spending time in Pennsylvania earlier in the day, watching his older brother, Josh, play for Triple-A Rochester — an affiliate of the Nationals.

“I was screaming, but not screaming because no words were coming out,” his mother, Lianne, said. “I think it was overwhelming for him because he was just quiet for a while as we were celebrating in our home in Brooklyn.”

It’s easy to understand how this moment would be overwhelming. Palacios was born into a baseball family. His father, Richie Senior, was a Minor Leaguer. His uncle, Rey Palacios, played for the Royals. And his older brother, Josh, made his Major League debut last April.

“He just had a greater desire and breed of hunger to [play] more and more as he got older,” Richie Senior said. “And then the willingness to work and the work ethics to put in to become better, it was just amazing to see that develop before us.”

That passion took him to Towson University, where he became the highest-drafted player in school history, getting selected in the third round of the 2018 MLB Draft by Cleveland. But just shortly after he joined the organization, he suffered a setback, having to undergo surgery on his right (throwing) shoulder to repair a torn labrum.

“It was pretty tough,” Richie Senior said. “He’s put so much into this and so many years into it and he sacrificed everything. And to see he had to put a pause and it was beyond his control, our control, it made it very difficult, emotionally.”

“Receiving that call as a mother, it definitely broke my heart to know that I was so far away from him,” Lianne said. “But we knew he would be able to overcome it. Our kids are from Brooklyn. They can overcome a lot of things.”

After his injury, Palacios had to find a way to keep working during a COVID-canceled 2020 season. He returned to hit .297 with an .874 OPS between Double-A and Triple-A in 2021. And even though he got off to a slow offensive start this season, he smacked his first homer of the year on Sunday, unknowingly setting the tone for what was to come the next day.

As soon as Palacios got the news, Richie Senior and Lianne scrambled to find flights to get them to Anaheim before first pitch. The long day of travel was rewarded when the couple got to California and learned that their son had been penciled into the last spot in the lineup, starting in left field.

It became even more exciting when he logged a 102 mph base hit in his first career at-bat. And if you can’t imagine how emotional of a day it was for the Palacios family, his mother gave a glimpse of how much it meant to them when she was mid-interview on Bally Sports Cleveland’s broadcast when her son picked up another single in his second at-bat.

“Amazing,” Palacios said, of having his parents in the crowd. “I mean, they sacrificed so much for me, so it’s only right I put a little show on for them.”

Palacios couldn’t help Cleveland get in the win column, but he was able to walk away with a few baseballs, the lineup card that had his name on it for the very first time and a memory that he and his family will never forget.

“I’m keeping [the balls and lineup card],” Palacios said, “and keeping them close to the heart.”