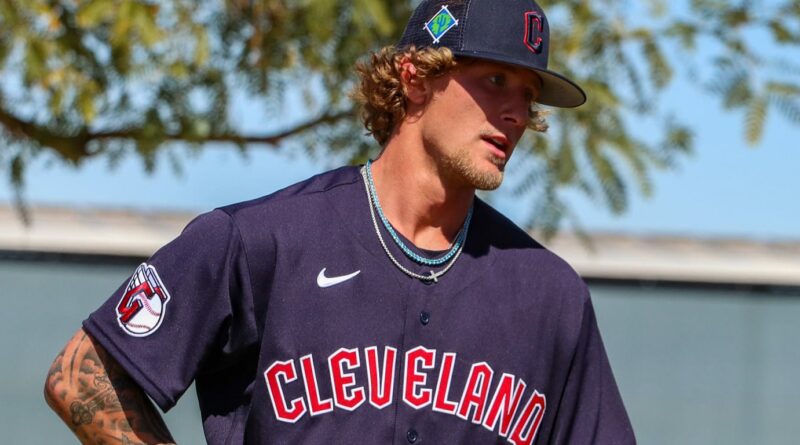 GOODYEAR, Ariz. — Guardians starter Zach Plesac has three goals for the 2022 season: Don’t miss a start, be named an All-Star and win a Gold Glove Award.

Plesac wasn’t able to make all of his starts in 2021, as he missed more than a month due to a broken right thumb. And as he looks to improve upon that this season, he’ll also look to rebound from posting a 4.67 ERA with a 4.73 FIP in 25 starts last year in order to get that coveted All-Star nod.

So, how can he take himself to the next level to accomplish his goals? Plesac started with subtle mechanical changes in the offseason.

“Really, I think just maintaining good posture,” Plesac said. “I’m gonna say every year, probably if you ask me, when I start to arch my shoulders too much and fall toward first, I get in spots where my pitches flatten out. Really, just working down the mound in a good direction and having level shoulders, make sure my eyes are balanced on the target — it’s almost like a sprinter. You don’t want to run with your head going all over the place.”

But the one thing that was different about this past winter than previous offseasons for Plesac was he realized the importance of his mental strength. Rather than just simply focusing on how to better throw the ball, he wanted to learn how to keep his mentality in peak condition through a grueling baseball season. Thus, he studied meditation and breath work.

“Doing that off the mound helps keep my mind on the mound calm,” Plesac said. “I think incorporating those breathing techniques, slowing the heart rate down, really can help me stay relaxed on the mound. They talk about when you exhale in your lungs, you take normal breaths, and we’re not exhaling as much as we should be. When you fully exhale, you relax the muscles. So really being aware of what your body is doing and listening to yourself and not being scatterbrained out there is really just the key.”

Despite the delayed start to Spring Training, Plesac was able to get himself — and keep himself — in a good spot over the offseason. So much so that the righty has already taken the next step from just throwing bullpens to facing hitters in batting practice sessions at Cleveland’s spring complex.

“He’s in great shape,” Guardians manager Terry Francona said of Plesac. “The ball came out of his hand really nice. … He’s a hard, hard worker. He spent a lot of time with [Shane] Bieber this winter. I don’t think that’s ever a bad thing.”

Bieber and Plesac put in countless hours of training together in Arizona this offseason. They were at sunrise to work out and worked on the same breathing techniques.

“Just really building that relationship off the field helps us become better teammates and understand each other better,” Plesac said. “I think it’s just another step of our relationship that we got closer and get to do great things together.”

Buddying up with the 2020 AL Cy Young Award winner certainly can’t hurt. And with Plesac training alongside a healthy Bieber, the two are ready to join a stacked rotation. Aaron Civale is back at full strength after missing parts of the season with a right middle finger sprain. Cal Quantrill settled in to be dominant on the rubber after transitioning back to his natural starting role and Triston McKenzie was red-hot in the second half of last year despite a rocky start to the season. Thinking of all five of these hurlers in the rotation at one time allows them to dream of how strong they could be.

“I mean, it’s lethal potential,” Plesac said. “If we all pitched to our potential, we could be the best rotation in the league. I really believe [that]. We’ve shown glimpses, we’ve shown signs. It’s hard being a young pitcher in this league and being consistent and being great. I think we’re getting to the point where we’re really building the foundation of our identities of who we are.”

As the calendar quickly continues to flip closer and closer to Opening Day with a shortened Spring Training, the Guardians know they may have to get more creative with their early season pitching plans. And although it’s not one of his main goals for the season, Plesac couldn’t help but picture what it would be like to start in the home opener on April 15 against the Giants.

“I literally got chills right now thinking about it,” Plesac said. “It’ll be an exciting time, not trying to look too far ahead, but when the time comes, I’m sure it’ll be special.”