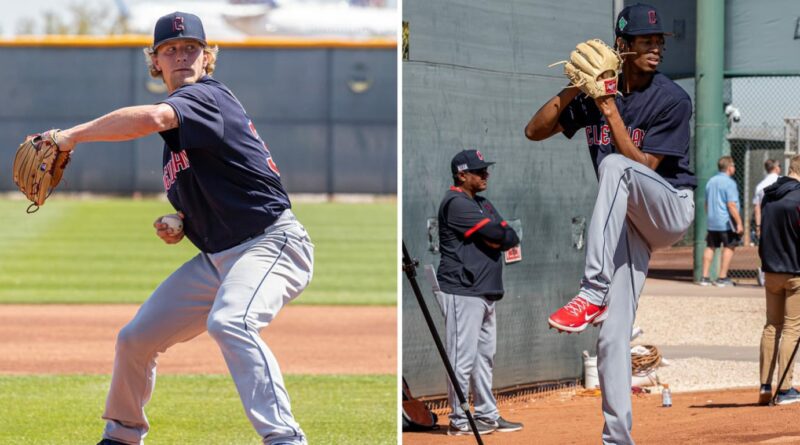 GOODYEAR, Ariz. — It’s been a couple of years since right-hander Zach Plesac was first called up to the Majors and then attended his first big league camp, yet somehow he still felt the same butterflies before his first Cactus League appearance in 2022.

“Today, on my way here, I had chills. I had butterflies. I felt like I was pitching a playoff game,” Plesac said. “It was just exciting, but compared to a couple of years ago, I just feel way more advanced with my repertoire.”

Plesac was ready to set the tone for his 2022 season in his first start of the spring, which aided Cleveland in a 6-1 victory over the Padres on Tuesday afternoon at Goodyear Ballpark. Itching to finally escape the live batting practice sessions at the team’s training complex, Plesac was hoping to see that his command — especially the glove-side fastball — would be as sharp in game action and that his offspeed pitches would be as effective. In two scoreless frames, he gave up three hits and no runs with four strikeouts.

“I wish I could’ve thrown another inning,” Plesac said, with a grin. “It’s all good. I’m just going to continue to work tomorrow, get my work in and bring the same energy tomorrow.”

o Plesac: Guardians’ rotation ‘could be best’ in MLB

Plesac’s growth since he was a rookie in 2019 has been significant, despite the fact that his stats from last season may not reflect that. And now, he’s looking to take what he’s learned from the last three years to unlock a version of himself that fans have yet to see.

“I think compared to the last few years, it’s growth, you know?” Plesac said. “That 2020 was a short sprint. If I took my eight best starts of 2021, I would’ve blown those numbers from 2020 out of the way. So it’s really just going to come down to consistency and making sure I come out and bring that edge, compete and execute pitches.”

McKenzie follows Plesac in first appearance
The goal for the Guardians was to have a reliever come in between Plesac and Triston McKenzie on Tuesday afternoon to allow McKenzie to warm up as if he was starting a game, rather than coming in as a reliever. Things went to script, as Trevor Stephan pitched the third before McKenzie worked the fourth and fifth frames.

After his outing, McKenzie went out to the bullpen in the sixth to get a few more pitches under his belt before leaving the ballpark. And in his time on the rubber, he couldn’t have looked better, tossing two hitless frames with three strikeouts and no walks.

“I’d say the biggest things for me are to kind of look at the swings that hitters are taking,” McKenzie said, “and to get as much feedback from the live-game ABs as you can about your pitches, about how they’re seeing them and how they’re reacting to them.”

McKenzie is confident he can continue the hot streak he found himself in during the second half of last season, and his outing on Tuesday certainly got him off to a solid start. But the biggest question that remains is how ready he and the rest of the rotation can be in a shortened spring, considering Opening Day is a little over two weeks away and the starters are just now getting their first Cactus League appearances.

“I don’t think we can set our eyes at the end yet,” McKenzie said. “I feel like all of this has been a work in progress just because of how shortened Spring Training is. So a lot of it is us leaning on our coaches, listening to what they’re saying and just trusting the plan that they’re putting in front of us.”