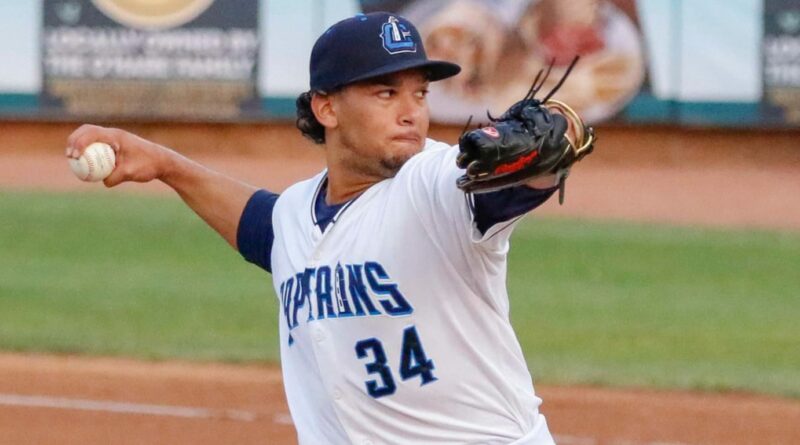 GOODYEAR, Ariz. — Born in Panama, Daniel Espino moved to Georgia for his sophomore year of high school and eventually developed the best fastball in the 2019 high school class. The 24th overall pick by Cleveland that June, he dazzled in his 2021 full-season debut, striking out 152 in 91 2/3 innings between Single-A and High-A with double-digit whiffs in six of his last eight starts. A few hours after we caught up with him, he struck out seven of the 10 Reds batters he faced in a back-fields game, including big leaguer Nick Senzel twice, first with a 102-mph fastball and then with a 93-mph slider.

Jim Callis: Your path to pro ball was a different than most. You were born in Panama, moved to the United States while you were in high school. Did you make that move to further your baseball career? What were the circumstances behind coming to United States?

Daniel Espino: I moved to Georgia when I was 15 years old and it was basically just my love for baseball, but also my family. My mom and dad, since the beginning, they were like, “You got to finish school first.” And as we know, being an international player, at the age of 16 some of the players leave school and my family didn’t want that to happen. So that’s why the move to Georgia. Also, when I was 10, I came to Miami and I was playing in Miami and I loved the atmosphere here. I love that you play year-around, something that we wouldn’t have back home. So stuff like that is what made that move happen.

Callis: How easy was it to get acclimated to going to school here and playing baseball at a high level and everything?

Espino: It wasn’t that easy. I remember my first couple of months, I wanted to go back home. I was missing home, everything. I came to Ludowici, Ga., a town that not even Americans know. I was there and that’s where it kind of like hit me: Do I want to do this for my for my life? I want to continue to do this. I think that I made the best decision.

Callis: Had you drawn interest from teams on the international market before you moved? Would you have been able to sign at age 16?

Espino: I’d say not really. When I was 16 years old, I was probably like 5-9, 5-10 and throwing 82-85, topping out. I was like 150 [pounds], so nobody on the international side saw the projection then. I came to Georgia Premier Academy, started working out there, started buying into the program and little by little saw the changes.

Callis: When did you first start realizing you were throwing a lot harder? By the time you were a senior, you had the best fastball in the high school class. I know you didn’t go from 85 to 100 mph overnight.

Espino: When I started out, I was weighing about 150, I was throwing 82-85, topping out. That winter, by December, I was throwing 87. So it was a little increase, but little by little I started to increase my velocity, but also put on more mass, more muscle. And long-tossing, buying into the program at Georgia Premier, so little by little I started throwing harder. That’s what made the difference. My junior year, in one of my first [live bullpens], I hit 96-97.

Callis: Georgia Premier Academy seems like they do a really good job. It seems like there’s always two or three pitchers there. Last year, the Rangers took Mitch Bratt in the fifth round out of there. I think they have a guy who’s throwing pretty hard there right now. Do you ever go back there? Talk to them?

Espino: I think it’s Santos, I believe that’s his last name. [Note: Dominican right-hander Javier Santos is touching the upper 90s.] Yeah, I always go back. It’s fun to go back and see all the players buying into the program, working out. And it’s a little motivation for me to remember where I came from and to always know this is where everything started.

Callis: It’s got to be nice for the kids there to look at you and see a guy who’s on the path to success. I know you throw four pitches. If you were ranking them, how would you rank them from best to worst?

Callis: Are you still fiddling with the changeup? Are you making adjustments to it?

Espino: It’s a pitch more for feel. When I was in high school, I didn’t get to throw it that much. And now that I’m a pro, I want to incorporate that pitch and feel really confident throwing it. Same thing with the curveball, so I’m really focusing on those two pitches. I feel that that I’m in a pretty good spot with my fastball and slider. So if I’m able to get those two pitches where I want those pitches to be, I think that I’m going to have a full arsenal and I’m going to be good.

Callis: There are a lot of talented pitchers in the Guardians system. If you could take one pitch from anybody in the system that you could have, whose pitch would you take?

Espino: It’ll say it would probably be a changeup.

Callis: Whose changeup would you want?

Callis: What are you working on besides your changeup? What do you need to do before you’re ready for the big leagues?

Espino: Just getting more comfortable throwing the baseball, getting it over the plate and being ahead of the hitters. Obviously gaining more experience as far as attacking hitters, sequencing, controlling the running game and stuff like that. I look forward to the season to improve on those things and feel more comfortable with my arsenal.

Callis: It seemed like at the end of the season you were making progress doing that in High-A, throwing more strikes than you had in the past. Was it just a case of getting more experience and getting a little more physically mature?

Callis: Fans always love comparisons, like this guy is going to be the next so and so. Is there a player you’ve been compared to? Or a comparison you’ve heard that that you like that stands out for you?

Espino: Not really. I haven’t heard one. I think that I own my own path. When I grew up, I was watching Mariano Rivera. So obviously I want to to do the same things that he did, win a World Series and be a Hall of Famer. Those are things that happen in my goals. But as far as right now, I wouldn’t be able to name names.