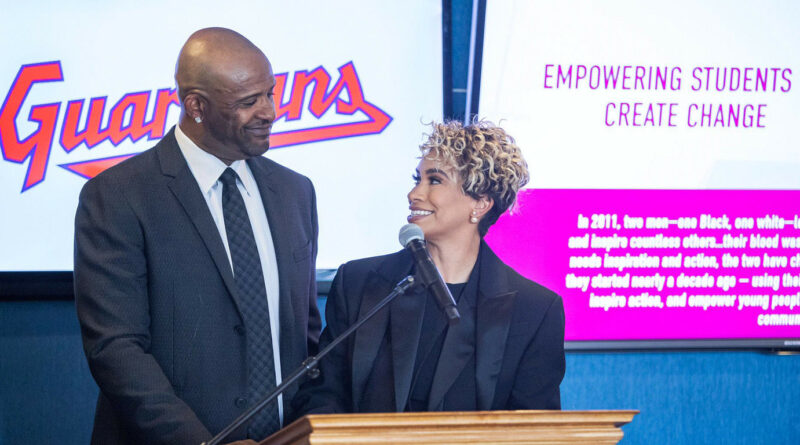 CLEVELAND — CC Sabathia was happy and humbled to receive a Lifetime Achievement Award at the Greater Cleveland Sports Awards on Wednesday night. But at 41 years old and entering only his third season of retirement from the big leagues, Sabathia had to chuckle at the implication of the honor.

“I feel like the Lifetime Achievement Award is for my baseball life, which is over,” Sabathia said. “But I’m at the beginning of so many different things.”

Sabathia has a media career as the co-host of R2C2, the podcast he does with broadcaster Ryan Ruocco. He is also the vice president of the Players Alliance, which was formed by current and former Black players as a means of providing resources and opportunities for the Black community in baseball and beyond.

And prior to receiving his Lifetime Achievement honor, which was given to him for his efforts to advance sports in Cleveland over the years, Sabathia and his wife, Amber, made a pit stop at his old stomping grounds at Progressive Field for an event showcasing another cause that is near and dear to them — Get in the Game.

Founded by Wake Forest baseball coach Tom Walter, Get in the Game is a non-profit that creates programs for students aged 13-24 to engage in conversations about racial equity. You might have heard the story in 2011 of Walter donating his kidney to one of his players, Kevin Jordan, who is Black. Prior to the surgery, a colleague at Wake Forest — not understanding the science — asked Walter whether he was sure a white person could donate a kidney to a Black person.

“My blood and his blood are the same,” Walter told his colleague, “and that’s all that matters.”

During the social unrest in the wake of the 2020 murder of George Floyd, Walter decided the world could stand to hear that message. That’s how Get in the Game was formed.

When CC and Amber Sabathia were introduced to Walter through a mutual friend, they eagerly threw their support behind the initiative. Amber sits on Get in the Game’s board of directors.

When looking for a place to launch the pilot program, Amber Sabathia suggested the couple’s old “hometown” of Cleveland, where Get in the Game would have the support of Cleveland Guardians Charities. Wednesday’s event at Progressive Field saluted two of the 125 students in 10th grade at Garrett Morgan School of Leadership & Innovation who completed the 12-week course centered on kindness, empathy, diversity and dignity.

“Sometimes you can’t change people’s minds and or what they’re thinking when they’re adults,” Amber said. “But you can help guide those minds when they’re kids.”

The program’s participants at Garrett Morgan have used the Get in the Game program to come up with ideas like a shoe and clothing drive for the homeless, a safe space where students having suicidal thoughts can talk through their feelings and an ethnic fair where students can learn about the various cultures and traditions of people from Cleveland’s diverse neighborhoods.

Sabathia said the program can provide students with the kind of learning experience he had as a young man who embarked upon professional baseball after high school.

“When I first got to Burlington, I had never seen a Dominican person. I got into the clubhouse, and there was a whole corner of them speaking Spanish. The earlier you’re exposed to different cultures or different types of people, the better you are as an adult. Some of these kids don’t get that opportunity. But if you have these programs in school, it helps you understand.”

This idea of impacting the next generation in a meaningful way is a guiding principle of CC Sabathia’s retirement life. He is no longer atop the power rankings in his own family. Amber began a career as a baseball agent for CAA Sports last year, and the couple’s oldest child, Carsten III, is eligible for the MLB Draft this year and has committed to Georgia Tech.

“I retired at the right time,” Sabathia said with a smile.

But his retirement life has not been quiet. And Get in the Game is an example of how Sabathia can continue to make an impact long after his last pitch and long after his Lifetime Achievement honor.

“With what he’s done after retirement, he should make a blueprint for a lot of the guys that retire,” Amber Sabathia said. “He’s definitely found his purpose off the field, whether it’s his philanthropic endeavors, giving back, being a part of the Yankee organization and the Players Alliance and coming back here to Cleveland, where he’s really giving mentorship to the younger guys.”