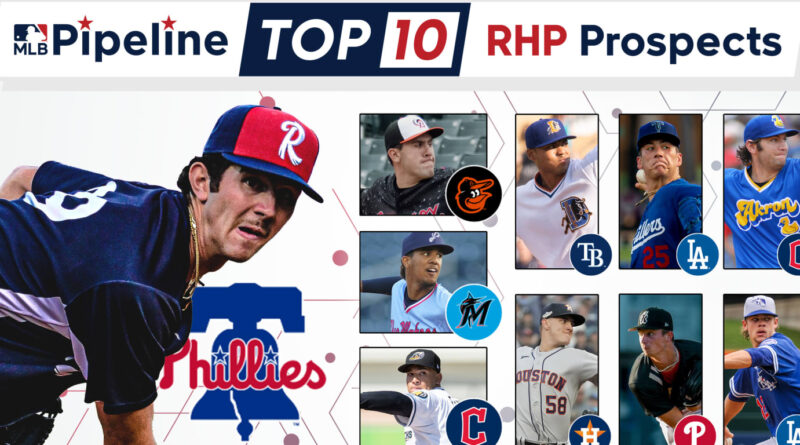 MLB Pipeline will reveal its 2023 Top 100 Prospects list at 7 p.m. ET on Thursday, Jan. 26, with a one-hour show on MLB Network and MLB.com. Leading up to the release of the Top 100, we’ll examine baseball’s top 10 prospects at each position.

Now, this is a fun debate.

Grayson Rodriguez finished 2022 as our top pitching prospect. Andrew Painter shot out of the gate to win MLB Pipeline’s Pitching Prospect of the Year Award in his first full season. Eury P?rez flashed potential from his towering 6-foot-8 frame in Double-A at just 19 years old.

So who’s the top right-handed pitching prospect in baseball? In the end, we went with the guy in Phillies red. But it was close. Very close.

It’s a debate we could be having for some time, albeit at the Major League level soon. Nine of the 10 hurlers named to MLB Pipeline’s 2023 preseason Top 10 RHP Prospects list have estimated times of arrival of 2023. The only one who doesn’t is No. 9 Mick Abel, who finished 2022 with five Double-A starts and could still cut the line to make a debut this summer in his own right. If these graduations all come to pass as expected, next year’s list will have a very different look. We have a full season ahead to study for that debate too.

Fastball: Espino (80)The 2019 24th overall pick looked like he was on his way to an eye-popping season in the spring of 2022 when he was sitting 98-100 mph — while touching 102-103 — in Spring Training, and he kept the heat coming over four starts with Double-A Akron, striking out 35 batters in 18 1/3 innings before injury ended his season prematurely. As if the velocity wasn’t enough, Espino’s fastball comes with lots of carry, further solidifying its 80 grade.

Curveball: Brown (65)The 24-year-old right-hander climbed to the Majors and made Houston’s postseason roster, in part because of the dominance of his low-80s curve. The 12-to-6 offering has plenty of power and bite to generate whiffs. Without a quality changeup, Brown used his curveball as his featured secondary against lefties in the Majors. The results: a .148 opponents’ average against and 30.4 percent whiff rate.

Slider: Espino (70)Espino doesn’t only throw his fastball hard. Last spring, he was zipping the breaking pitch in the low-90s, giving him a more horizontal pitch, albeit one with heater velo. Before that, the Cleveland righty had shown an ability to manipulate the speed of the pitch, depending on how much depth he wanted on it; the wealth of options left hitters befuddled. So much for anyone even trying to sit on the triple-digit fastball.

Changeup: Rodriguez, P?rez, Stone (70)Lefties beware. These righties have something in store for you too. All three showed off mid-80s changeups that looked close to their fastballs out of their hands, only to tumble and fade below waving bats. Neither Rodriguez (.157), P?rez (.204) nor Stone (.216) had lefties bat higher than .220 against them in 2022, on account of those impressive cambios.

Control: Painter (65)Hitters are meant to be more patient as you climb the ladder, right? Consider this: the 19-year-old Painter finished out his first full season at Double-A Reading, where he was more than five years younger than the average player. He walked only two batters in 28 1/3 innings during his time there. His 6.2 percent walk rate across three levels was the lowest among teenage pitchers with at least 70 frames in 2022. The 6-foot-7 righty’s ability to pitch in the zone improved as the season wore on, and it could be plus-plus by the end of 2023 if he continues on this trajectory.

Highest ceiling: Painter The 2021 13th overall pick gave everyone a taste of his ceiling with a 1.56 ERA, 0.89 WHIP and 155 strikeouts in 103 2/3 innings across those three levels in his first full season, and he has the stuff to back up the results with a fastball that can touch triple-digits, a plus high-spin slider and two more pitches in his curve and change that keep hitters guessing. That’s just the start. Painter only turns 20 in April and likely has some development ahead of him still. Be scared, National League East.

Highest floor: RodriguezThe O’s hurler almost certainly would have debuted in the Majors in 2022 if not for a Grade 2 lat strain that held him out for three months. He looked nearly ready by his return to the Triple-A rotation in September too, before the season ran out on him. The 23-year-old’s deep four-pitch mix and plus control have long made him a potential ace, but even if the stuff takes a slight step back at some point, he’s likely still a mid-rotation option for Baltimore.

Rookie of the Year Award candidate: RodriguezIf he can get through this spring healthy, Rodriguez is a strong candidate to open the season in the Orioles’ rotation and would be a ROY candidate from his first pitch. His innings might need to be managed some — he’s yet to throw more than 103 in a Minor League season — but he’s a better prospect than Spencer Strider was at this time last year. We saw what he accomplished when given a full year in the bigs.

Highest riser & humblest beginning: StoneThe Dodgers selected the Central Arkansas right-hander in the fifth round of the shortened 2020 Draft, meaning he was their final pick that year. Stone signed for just $97,500 (well below the $327,200 assigned to his slot as the penultimate pick in the whole process) and he wasn’t considered among the Dodgers’ Top 30 prospects entering his first full season. He’s fanned 306 batters in 212 2/3 innings over four full-season levels since then and now fits comfortably on the Top 100 overall list with three above-average pitches and good control.

Most to prove: EspinoWe’ve already listed how wicked the Panama native’s stuff can be. Now, can he be healthy? Espino first missed time with a knee issue in 2022 and a shoulder injury kept him on the shelf throughout the summer. He finished the year with only four Double-A starts. In our recent Executive Prospect Poll, front-office members thought he’d be the most likely Minor Leaguer to become a dominant closer someday, partly because the injury concerns might move him to the bullpen. It’s on him this year to prove he can take regular turns in the rotation and become Cleveland’s next homegrown starting star.

Keep an eye on: Tink Hence, CardinalsSt. Louis has been very careful in how it has utilized the 2020 63rd overall pick to this point — first giving him only eight complex-level outings in 2021 and then capping him at 60 pitches down the stretch in Low-A last year. The arsenal is incredibly good, however. Hence was around 94-97 mph with his fastball with Palm Beach and got lots of swings-and-misses on his curveball and changeup, to say nothing of his slider with good depth. The kid gloves will come off a little more in 2023, and if the stuff holds up deeper into starts, Hence could easily find his way onto a Top 10 RHP list soon.