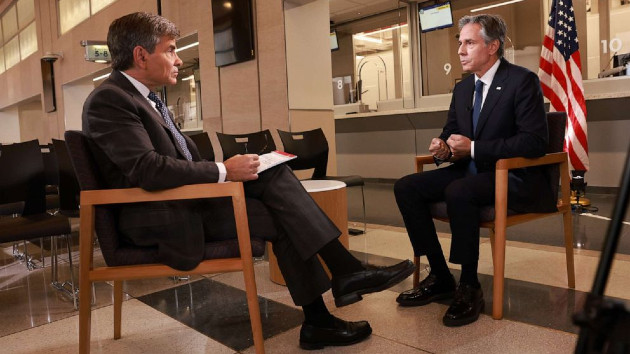 “Our purpose is simple. It’s to stand with the Ukrainians, to make sure that their country remains independent … and, ultimately, to have the strongest possible hand at a negotiating if one emerges, because President Zelenskyy has said himself — at some point, this is going to end through diplomacy,” Blinken told ABC News’ George Stephanopoulos in a sit-down interview airing Thursday on Good Morning America.

Stephanopoulos pressed Blinken on that point, noting that Ukrainian President Volodymyr Zelenskyy has “also said he’s not going to negotiate with Vladimir Putin, only with the next Russian president.”

“Well, he’s been clear that diplomacy is going to have to bring this to an end at some point,” Blinken responded. “But what we’ve seen thus far is no interest on the part of Putin in meaningful diplomacy.”

When asked whether he thinks Putin is “still rational,” Blinken said: “It’s hard to put yourself in someone else’s mind. I think he’s rational, but the decisions he’s making — or maybe better put, his objectives — are not rational.”

Meanwhile, OPEC+, a group of oil-producing countries led by Saudi Arabia and Russia, announced earlier this month that it will significantly slash production in order to boost prices. The move has forced the United States to release 15 million barrels of oil from its strategic reserve, leaving many in Washington to question whether Riyadh remains an ally, even though Saudi Arabia voted in favor of a U.S.-backed United Nations resolution last week condemning Moscow’s illegal attempts to annex parts of war-torn Ukraine.

“The step that Saudi Arabia and the OPEC+ organization took was one that was deeply unfortunate and also deeply misguided,” Blinken said, “to the extent that this causes oil prices to go up and Russia’s exporting oil, it’s helping to line Putin’s pockets.”

“We’re all trying to restore economic growth,” he added. “That’s exactly the wrong time to engage in production cuts.”

Stephanopoulos pressed Blinken on whether those are “the actions of an ally.”

“In this instance, it’s not,” Blinken replied. “But we have a multiplicity of interests with Saudi Arabia.”

Russia’s ongoing invasion of neighboring Ukraine and its global economic fallout are not the only challenges the United States is facing abroad. With Chinese President Xi Jinping poised to secure an unprecedented third term in office, Blinken said he believes Beijing will seek a speedy reunification with Taiwan, a self-governing island that split from mainland China in 1949, though Beijing claims it as its territory. Xi, who has been in power for over a decade, has made clear his desire to reunite China with Taiwan and, in his speech opening the 20th National Congress of the Chinese Communist Party in Beijing on Sunday, he gave no indication of changing course on the issue.

When asked whether he thinks Xi will speed up the reunification process “by any means necessary,” Blinken said: “Potentially by any means. Through coercion and pressure and potentially, if necessary, by force.”

The U.S. government has a “One China Policy” that recognizes the people of mainland China and Taiwan as being part of “One China,” views Beijing as China’s sole legal government and does not support an independent Taiwan, but considers the matter “unsettled.” Washington is also militarily supportive of the self-governing island and maintains extensive commercial and unofficial ties.

“We’re committed to doing everything we can … to make sure that Taiwan has the ability to effectively defend itself against aggression,” Blinken added. “We’ve also made very clear to China that our expectation is these differences will be resolved peacefully.”

Stephanopoulos asked Blinken what he has to say to Americans who may feel “the world is more dangerous now than it’s ever been.”

“I say yes, it is dangerous. It is complicated. It is full of challenge. And part of it is because we know what’s happening around the world in real-time in ways that we never did before,” Blinken replied. “But at the same time, I’m also seeing incredible opportunities, and opportunities that we have to find ways to seize.”

“One of the first instructions I got from President Biden in taking this job was to reenergize our partnerships,” he added. “That’s what our diplomacy’s all about. And later today, here in Philadelphia, I’m going to get a chance to swear in some new American citizens — one of the parts of my job that gives me the greatest satisfaction.”

“It’s the renewal of our country,” Blinken responded. “My late stepfather, he became a citizen of the United States … and he used to say to me: ‘You know, you are an American citizen by a very happy accident of birth. I’m an American by choice.’ That’s a very powerful thing. That’s what carries our country forward.”