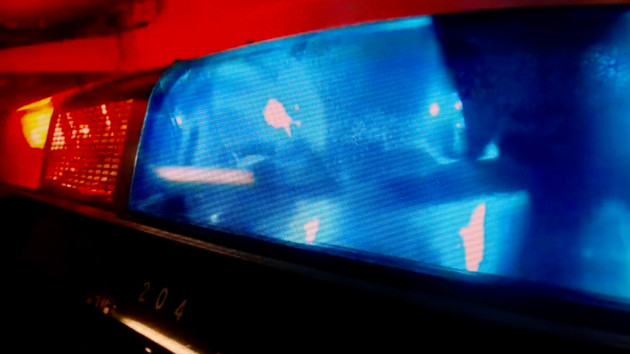 Despite being mortally wounded, Officer Truong Thai returned fire as he laid on the ground. The suspect — Tyson Hampton, 24, of Las Vegas — was arrested several blocks away after the pre-dawn shooting on Oct. 13, the Las Vegas Metropolitan Police Department said.

“The blue vehicle that Hampton was driving doesn’t just accelerate and try to leave the area. He’s driving very slowly as he fires back at the officers and the citizens on the street,” Las Vegas Police Assistant Sheriff Andy Walsh said during a press conference on Monday, while playing videos from both officers’ body-worn cameras.

Hampton faces eight felony charges, including murder and attempted murder, as well as one count of misdemeanor domestic battery. He made an initial court appearance on Oct. 14, where he did not speak and was temporarily represented by a deputy public defender. He is being held without bail at the Clark County Detention Center in Las Vegas, pending his arraignment on Tuesday.

“The tragic part about this is (that) from the evidence, this defendant was being investigated for a misdemeanor,” Clark County District Attorney Steve Wolfson told reporters on Oct. 14. “That’s why it’s a sad day. It didn’t have to happen. This officer didn’t have to lose his life.”

Hampton’s wife had called 911 at about 1 a.m., saying she had been battered by her husband. Thai and Officer Ryan Gillihan were assigned to respond. Gillihan arrived first and spoke with Hampton’s wife, who was with her mother, several blocks east of the Las Vegas Strip. Hampton was sitting in his car a short distance away, according to police.

Footage from Thai’s body camera shows the officer arriving on scene and walking over to Hampton’s car to ask him “what’s going on,” but the man didn’t reply. Thai tells Hampton to put his hands on the steering wheel, which he does without saying anything, even as the officer asks him again “what’s going on tonight.” Hampton then looks over to the passenger side of the vehicle and removes his right hand from the steering wheel. Thai reaches into the car and attempts to control Hampton’s arm while ordering him to “get out of the car.”

As Hampton begins to drive away, Thai walks backward to his patrol vehicle while Gillihan walks toward Hampton’s car. Hampton then points a gun out of the driver’s side window and unleashes a barrage of bullets, striking his mother-in-law and Thai, who was wearing a ballistic vest. Both officers fire back as Hampton drives away from the area, as seen in their bodycam videos.

A short time later, Hampton’s vehicle was spotted by another officer driving not far from where the shooting occurred. Hampton refused to stop for all marked police vehicles and a PIT maneuver (precision immobilization technique) was conducted. Hampton was then taken into custody with the assistance of a K9 unit, according to police.

Thai, who was shot in the torso, was transported to Sunrise Hospital and Medical Center in Las Vegas, where he died from his wounds. He was 49 and had been a member of the Las Vegas Metropolitan Police Department since 1999. Hampton’s mother-in-law was also transported to the hospital for treatment of a non-life-threatening injury, police said.