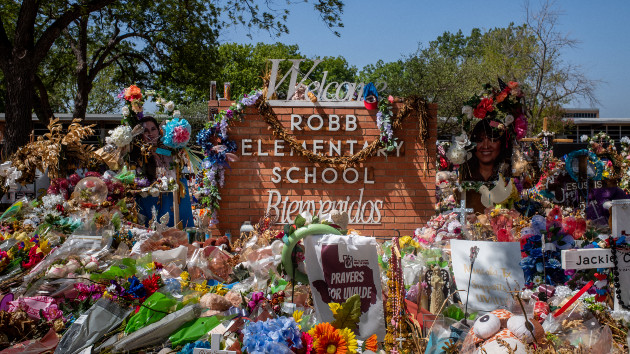 (UVALDE, Texas) — The superintendent of a school district in Uvalde, Texas, where a gunman killed 19 fourth-grade students and two teachers earlier this year, has announced his plans to retire.

Uvalde Consolidated Independent School District Superintendent Hal Harrell — along with other school officials and local law enforcement — has faced intense scrutiny over the handling of the May 24 massacre at Robb Elementary School, one of the deadliest school shootings in U.S. history. Nearly 400 law enforcement officers rushed to the scene, but “egregiously poor decision-making” resulted in allowing the 18-year-old shooter to remain active inside a classroom for more than 70 minutes before he was finally confronted and killed, according to a damning investigative report released by Texas lawmakers in July.

Harrell’s impending retirement was announced on Friday. In a statement posted on his wife’s Facebook account on Sunday, Harrell said the decision was “not made lightly and was made after much prayer and discernment.”

On Monday evening, after an hour-and-a-half of closed-door deliberation, the school board confirmed their acceptance of Harrell’s retirement and unanimously approved a motion to conduct a search for his replacement. Walsh Gallegos, an education-focused law firm with offices in Texas and New Mexico, will oversee the hiring process. Harrell has said he intends to stay on through the academic year until a new superintendent is named.

A crowd of people gathered outside before the start of Monday’s meeting to show their support for Harrell, with many holding up homemade signs, hugging him and cheering him on.

Harrell has worked for the school district since he started as a special education teacher in 1992, eventually working his way up to Uvalde High School principal and then following in his father’s footsteps in 2018 when he became superintendent.

Families of some of the Robb Elementary School shooting victims spoke at Monday’s meeting, telling the school board that they believe negligence and incompetence contributed to the massacre. They pleaded with Harrell directly to bring the tragedy-torn community together. They also expressed frustration at their fellow community members, saying they didn’t receive as much support after the shooting as Harrell has this week.

“I’m disgusted with this community,” said a tearful Kimberly Rubio, the mother of 10-year-old student Lexi Rubio, who was among those killed.

“We can’t get people to care enough to come to the school board meetings, the city council meetings or anything else,” said Brett Cross, the guardian of 10-year-old victim Uziyah Garcia.

Cross had been staging a sit-in protest outside the school district’s administration building until Friday.

After voting on Harrell’s retirement, school board members continued with other items on the agenda for Monday’s meeting as dozens of people in the audience got up and left.

“What happened to accountability?” one Uvalde resident said on their way out. “We’re not getting none.”

Last week, the school district suspended its entire police force. Some officers employed with the police department were placed on leave, while others were reassigned. The school district also fired a recently hired officer who had been a Texas state trooper on the scene at Robb Elementary School when the shooting took place and was under internal investigation for her actions that day.