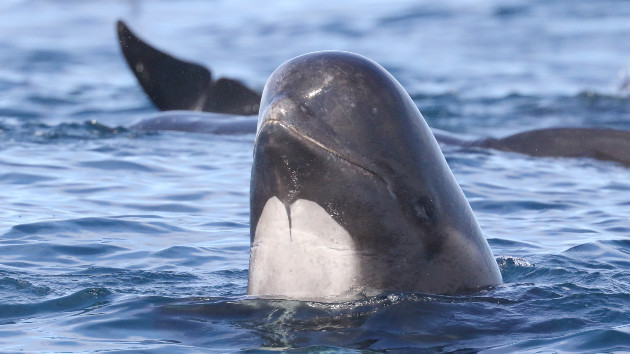 (NEW YORK) — Hundreds of pilot whales that beached on the Chatham Islands in the last week died of natural causes or were euthanized, according to New Zealand’s Department of Conservation.

Some whales were dead on arrival and others were put down, said Dave Lundquist, DOC’s technical advisor marine species and threats. The whales will decompose, Lundquist added.

“We do not actively refloat whales on the Chatham Islands due to the risk of shark attack to humans and the whales themselves, so euthanasia was the kindest option,” Lundquist said.

“This is a sad event for the team and the community, with many people being affected by it,” Lundquist said.

Pilot whales tend to be the most frequent causalities of mass strandings, said the DOC. Though the exact reason behind whale strandings remains unclear, a few traits unique to this species of aquatic mammal make them more likely to be beached.

Pilot whales utilize echolocation for directions. Navigation errors occur, including human intervention, meaning the whales can accidentally trap themselves in a shallow bay or beach bar.

Another reason for stranding could be a disease. When whales from a pod are infected by a virus or toxic algae, they may all become sick and unable to swim, beaching themselves in response.

Pilot whales, uniquely, are social creatures, moving in large groups, said Ana?s Remili, a Ph.D. candidate and whale researcher at McGill University. When something goes awry, like a mistake in echolocation or an illness, pilot whales tend to beach themselves altogether.

“As we’ve seen with COVID, it’s quite easy to transfer a virus when you’re living in close quarters,” Remili said. “That’s what happens with stranded whales.”

On the bright side, Remili said, pilot whales are not an endangered species. Plus, mass strandings can inform environmentalists about the impact of climate change. If mass strandings become more common, then scientists can sample the dead individuals to understand if there is an ecological link to pollution.

“This is an incredibly sad event but we can use it to understand how our world is changing,” Remili said.