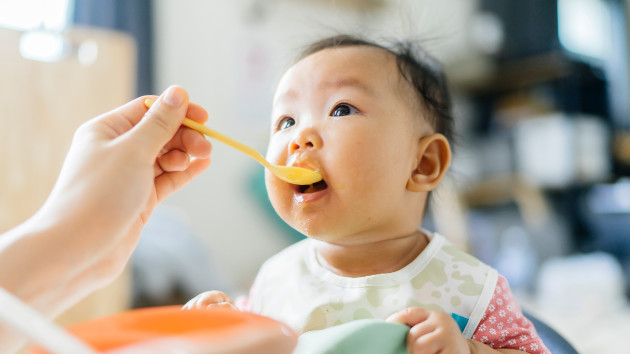 (NEW YORK) — Knowing what to put on a baby’s plate and when can be daunting and nerve-racking for new parents. Now experts recommend regularly offering non-choking forms of foods containing common allergens between 4 and 6 months of age.

“Allergies are a part of a child’s life in the United States today, unfortunately. We know about 8% of American children, by the time they go off to college, carry a diagnosis of food allergy,” Dr. Wendy Sue Swanson, a mother of two and a board-certified pediatrician, told ABC News’ Good Morning America.

“We know that feeding all different kinds of foods, including common allergens in the beginning of life, tends to down regulate or decrease the risk of food allergies dramatically,” added Swanson.

The advice to incorporate common allergens between 4 and 6 months is a dramatic shift from what doctors previously told parents and caregivers. In 2000, the American Academy of Pediatrics advised parents to delay the introduction of common food allergens for the purpose of preventing allergic disease. For example, experts previously recommended delaying cow’s milk until age 1 year; eggs until age 2 years; and peanuts, tree nuts, and fish until age 3 years.

New evidence since 2000 shows that the practice of delaying introduction of highly allergenic foods may actually increase rather than decrease the incidence of food allergies. A research study from 2018 suggested that the increased likelihood of peanut allergy seen in younger siblings of a peanut allergic child may be due in part to the practice of delayed introduction rather than genetics alone.

“For example, when you have food in the tummy, in the gut, those food proteins are exposed to the immune system and a baby’s body grows up exposed to them and tolerant to them,” emphasized Swanson.

While any food can cause an allergy, knowing common triggers may help parents and caregivers identify a potential food-related allergic reaction.

“In general, you can develop an allergy to any food. In fact, there are more than 200 foods that we know humans are allergic to but there is a certain subset of foods that tend to be more provoking when it comes to allergies,” said Swanson.

The most common food allergy that starts in childhood and persists into adulthood in the United States is peanuts. Contrary to popular belief, peanuts are actually not a tree nut. They are a type of legume.

Besides peanuts, the other common food allergens among children in the U.S. are:

Sesame seeds, which is one of the fastest growing food allergies in the U.S. according to Dr. Swanson, are increasingly recognized as the ninth major food group that causes allergies.

Currently, the first eight food groups mentioned in the list above make up around 90% of all food allergies and must be declared on U.S. product labels.

How to introduce allergens safely

The first step in introducing any “complementary foods,” the term referring to all solid and liquid foods other than breast milk or infant formula, is assessing an infant’s developmental readiness such as adequate ability to hold one’s body upright, ability to indicate desire for food by opening the mouth and leaning forward and the ability to swallow safely.

The next step is making sure the infant tolerates a few of the more “typical” complementary foods such as cereals, fruits and vegetables.

When introducing allergens, “you want to just make sure that you’re creating a texture and a consistency that’s easy and safe for your baby,” said Swanson. “And then making sure if you are using things like nuts or nut butters, that you are just thinning those nut butters to a way that they are not a choking risk.”

For high-risk children, i.e., children with a strong family history or children who have a personal history of moderate-severe eczema or egg allergy, the latest Dietary Guidelines for Americans published by the United States Department of Agriculture (USDA) advise parents to speak with a pediatrician before giving their infants peanuts.

For reasons unrelated to allergies, cow milk or fortified soy beverages should not be offered to infants younger than age 12 months, the USDA says.

Reassuringly, “90% or more of babies will never develop an allergy or have any kind of reaction to food,” said Swanson.

“Now, if you are at home and if you think your baby might have a reaction, there are two symptoms that a baby will show if they are likely having a reaction to food: hives, or vomiting, or both within about minutes to two hours,” said Swanson.

Almost always, allergic reactions are not life-threatening and can be managed safely at home. However, if an infant is exhibiting signs of a severe allergic reaction such as mouth or tongue swelling, trouble breathing or wheezing, hoarse voice, or trouble swallowing or drooling, call 911 right away.

“How you feed your baby with all those common allergens in early life will continue to protect them to stay that way,” said Swanson.