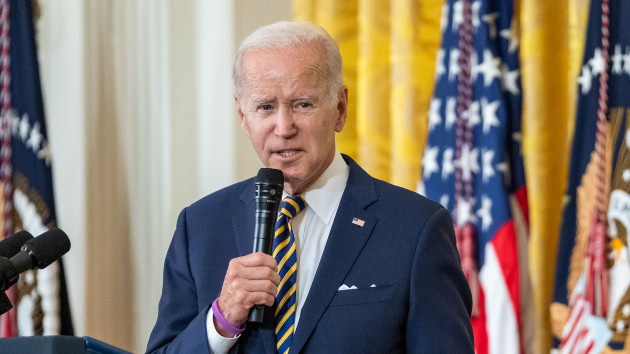 (WASHINGTON) — Social Security — long referred to as the “third rail” of American politics — so charged as to be fatal if touched — is back in the spotlight as the midterm elections near.

President Joe Biden has made it a key campaign theme — repeatedly asserting the benefit program is “on the chopping block” if Republicans win back control of the House and Senate.

“Your Social Security you paid for your whole life is on the ballot,” Biden said this week at a virtual fundraiser in support of a House Democrat.

Biden has seized on two proposals from GOP Sens. Rick Scott of Florida and Ron Johnson of Wisconsin, who say Social Security should be up for reauthorization by Congress every five years or annually, respectively.

The two senators have pushed back, saying their ideas are intended to fix the program, not to eliminate it.

Johnson argues the plan to make the funding discretionary, rather than mandatory as it’s been since the program’s creation, will boost the Social Security Administration’s finances as it experiences shortfalls.

The ramped-up rhetoric comes just weeks out from the consequential midterm elections, where economic issues are front and center amid high prices and fears of a recession.

Social Security recipients will get a boost in monthly benefits beginning in January 2023, the administration said Thursday after announcing its annual cost-of-living adjustment, or COLA.

“Because of the recent inflation, the security of Social Security is just absolutely paramount in our members’ and all seniors’ minds,” Rich Fiesta, executive director at the Alliance for Retired Americans, which represents millions of retired trade union members, told ABC News.

But experts said there’s more to the story than what both sides are stumping when it comes to the benefit program, on which more than 65 million Americans currently rely upon for monthly payments.

The program is funded on a pay-as-you-go basis through a payroll tax that goes toward a retiree’s monthly payments. But there’s currently more people taking out of the system than there are workers putting into it, leading to an imbalance — one that’s expected to continue to grow.

“It may be true that in a couple of years or so, they can’t pay the current level of benefits,” Bloch, an expert on Social Security and other benefit programs, told ABC News. “But the idea of running out of money is a red herring. It’s just never going to happen.”

The Social Security trust fund, which pays out benefits, estimates its excess reserves will be depleted by 2034. Once depleted, the fund would be able to cover only 77% of scheduled benefits.

“The Trustees recommend that lawmakers address the projected trust fund shortfalls in a timely way in order to phase in necessary changes gradually and give workers and beneficiaries time to adjust to them,” the board of trustees recommended in its 2022 report.

“This particular debate is a purely procedural one, and I’m not sure in any way how this, for better or worse, makes it easier to change Social Security,” said Andrew Biggs, a senior fellow at the American Enterprise Institute and a former deputy commissioner of the Social Security Administration.

Richard Johnson, director of the Program on Retirement Policy at the Urban Institute, was similarly skeptical.

“I don’t think it would make things better,” Johnson said. “Social Security has always been this program with its own funding source that people could count on and what policymakers need to do is to get the system back into balance by either raising revenues or cutting benefits, or both.”

Any potential changes to Social Security to address its finances — including raising the payroll tax or changing the benefit formula — could be made by Congress today without changing the funding mechanism, experts noted.

And while Republicans say they don’t want to cut or eliminate the program, some worried about Congress having to reauthorize the program — especially given that lawmakers often run into issues passing spending legislation on time.

“It would just create a lot of uncertainty for retirees and for people with disabilities,” said Johnson. “It seems to me like that’s an unworkable system. And a better approach is to fix Social Security’s finances and let’s put it on firmer financial footing, but let’s not fundamentally change the nature of the program.”

“I’ll protect those programs. I’ll make them stronger. And I’ll lower your cost to be able to keep them,” he said.

House Republicans are similarly vague on the issue. In the “Commitment to America” plan released by the caucus last month, GOP lawmakers pledged to “save and strengthen Social Security and Medicare” but didn’t specify their proposals to do so.

But Johnson at the Urban Institute said lawmakers should make a decision on how to address Social Security “as quickly as possible so that people who are approaching retirement know what kinds of benefits they can expect so they can better plan for retirement.”