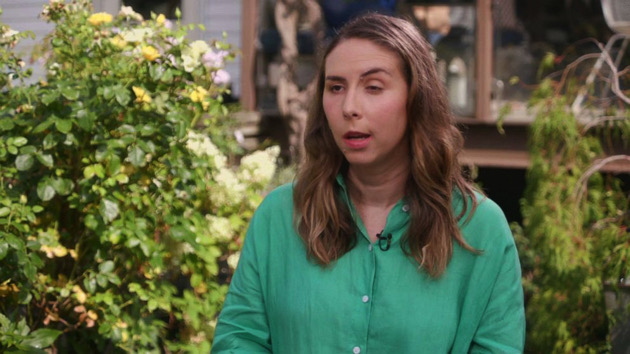 (NEW YORK) — Of all the planning that comes with being a new mom, one woman hadn’t planned for a surprise diagnosis of a neurological condition – just weeks before her due date.

Now, she’s on a journey to spread awareness of Bell’s palsy, a neurological condition that causes temporary facial paralysis or weakness on one or both sides of the face.

Elena Sheppard, who was pregnant with twins at the time, said she woke up one morning in early June with a “weird” feeling around her mouth.

“Later that day, I was having coffee with my husband and he was like, ‘I don’t know what just happened but half your face just fell,’” said Sheppard to “Good Morning America.”

The 35-year-old was diagnosed with Bell’s palsy.

At the time, Sheppard had never heard of the condition.

According to the NIH, Bell’s palsy affects less than 1% of the U.S. population. Pregnant women are two to four times more at risk, according to a study in the Obstetrical and Gynecological Survey.

Sheppard said she still struggles with symptoms nearly three months after her diagnosis.

“My eye is tearing right now, that’s a big symptom,” she said. “I can’t close this eye at all, and in the beginning, I had to tape it shut. I can’t move my lip at all. I can’t scrunch my nose.”

Sheppard has since given birth to two healthy twin boys, Casper and Lyle.

“I do what I think is smiling,” said Sheppard. “It’s more scary than frustrating honestly, because you can’t help but think, ‘Is this what my face is gonna look like forever?’”

According to the NIH, symptoms improve within 3 weeks in most cases, but symptoms can last longer for others. In addition to sudden weakness in the face, those with Bell’s palsy can have trouble closing their eyes or mouth.

“This isn’t just cosmetic, not to minimize that, but you can have tearing issues. You can have damage to the cornea. You can have issues swallowing food or chewing food,” ABC News chief medical correspondent Dr. Jennifer Ashton explained on Good Morning America Friday.

Bell’s palsy and a stroke can have similar symptoms, so anyone experiencing these symptoms should seek medical attention immediately.

When it comes to treatment for Bell’s palsy, Ashton said they’re mostly supportive.

“We tend to give steroids, antiviral medications for pain, over-the-counter Tylenol or ibuprofen,” Ashton said. “Most will recover. It can take a very long time. And sometimes the results can be permanent. But the bottom line is, if you notice any of these symptoms, you want to get to an emergency room. Make sure it’s not a stroke since that’s life-threatening.”

The condition can occur at any age and affect any gender. The exact cause remains unknown.

Sheppard said she, and her husband, are focused on taking on the next challenge of parenthood, but she said she wanted to share her story to help others.

“We see images of perfection all the time and that’s completely unrealistic to everybody’s lives,” she said. ”I think if I had seen more images of this, it probably wouldn’t have been as scary. So I think just normalizing all the different things that can happen to a body is really important.”