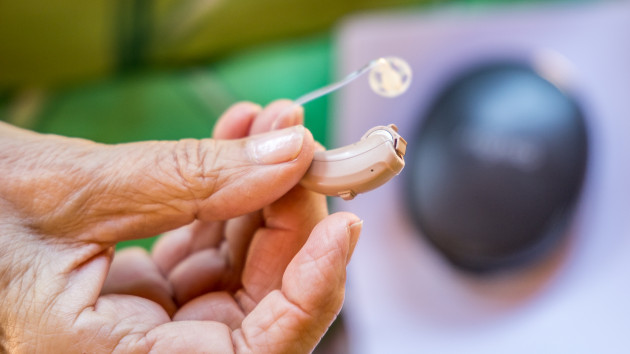 (NEW YORK) — For the first time, hearing aids are available for purchase over the counter at retailers across the United States.

Starting Monday, under a historic ruling issued by the U.S. Food and Drug Administration, adults with mild-to-moderate hearing loss can buy hearing aids at a store or online without a prescription, medical exam or audiologist fitting — and for thousands of dollars less than they previously cost, according to the White House.

The FDA estimates the new rule could lower average costs for hearing aids by as much as $3,000 per pair, the White House said. Consumers are expected to save about $1,400 per individual hearing aid, or over $2,800 per pair.

“A person’s ‘whole health’ is a combination of many factors, including hearing, that influence physical and mental well-being,” Walmart’s chief medical officer, Dr. John Wigneswaran, said in a statement Monday. “Offering easy access to OTC hearing aids — something that seems quite small — is a solution that can improve our customer’s health outcomes and their ability to live better and healthier.”

Walgreens is now selling hearing aids at stores nationwide and online for $799 per pair. Walmart is also offering an assortment of over-the-counter hearing aids — ranging in price from $199 to $999 per pair — on Walmart.com, SamsClub.com and in over 1,000 Vision Centers in Walmart stores across Colorado, Michigan, Missouri, Ohio, Pennsylvania, Tennessee and Texas, as well as 474 Sam’s Club Hearing Aid Center locations. CVS is now selling over-the-counter hearing aids online, with varying options on model and price point. The company will also offer hearing aids in select CVS Pharmacy locations beginning in November, according to the White House.

Best Buy will offer nearly 20 different hearing devices online starting this week. By the end of the month, the company will offer hearing aids in nearly 300 stores across the country. Devices will range in price between $200 and $3,000.

Hy-Vee will sell over-the-counter hearing aids online and in 34 locations across Iowa, Kansas, Minnesota, Missouri, Nebraska and Wisconsin starting this week. The company plans to offer hearing aids in 100 locations by the end of the year. There will be four different models ranging in price from $499.99 to $999.99, according to the White House.

The FDA announced the move back in August, issuing a final ruling that established a new category of over-the-counter hearing aids to improve access and, in turn, lower costs for millions of Americans. The ruling followed an executive order from President Joe Biden in 2021 that called for the FDA to take steps to allow hearing aids to be sold over the counter.

“The new over-the-counter category applies to certain air conduction hearing aids, intended for adults aged 18 and older who have perceived mild-to-moderate hearing loss,” Dr. Jeffrey Shuren, director of the FDA’s Center for Devices and Radiological Health, said at a briefing on Aug. 16. “Hearing aids for severe hearing loss or for users younger than age 18 will be prescription devices, to assure patient safety as well as effectiveness.”

Air conduction hearing aids are worn inside the ear or on the ear, with an inside-the-ear component and amplified sound into the ear canal. In an effort to prevent further hearing loss, these devices will have sound limits, the FDA said.

Nearly 30 million Americans suffer from some degree of hearing loss, including nearly 10 million adults under the age of 60, according to the White House.