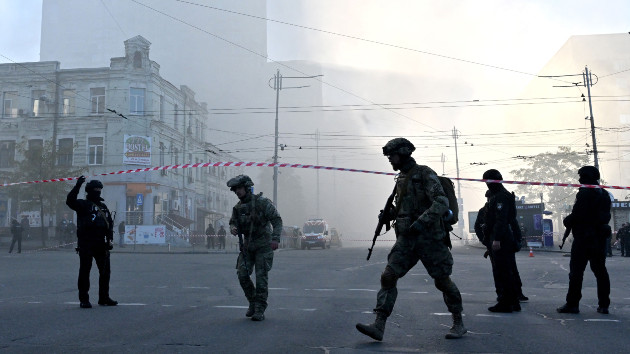 Marital law grants Russia’s authorities huge powers over the civilian population in the regions it is imposed. Martial law is set to go into effect on Thursday.

The decree, which Putin announced during a televised meeting with his security council, will now be sent to be rubber stamped by Russia’s upper chamber of parliament, the Federation Council.

Putin has also granted new powers to governors in several regions bordering Ukraine, but it is unclear what those mean yet.

Russia has announced the mass evacuation of civilians from the key city of Kherson, as well as all of its civilian occupation administration there.

Russia’s newly appointed overall commander for its war in Ukraine, Gen. Sergey Surovikin, said on Tuesday that “difficult decisions” may have to be made in the near future regarding Russia’s position in Kherson. In his first public remarks since his appointment, he said the situation around Kherson was already “extremely difficult.”

The evacuation combined with Surovikin’s comments has fueled speculation that Russia may be preparing to retreat from the city in the face of a Ukrainian offensive, in what would be a major defeat for President Vladimir Putin.

Other Russian officials though have suggested the evacuation is in preparation of Russian defense of the city. Kherson’s Russian-appointed governor on Wednesday denied Russia was planning to “give up” the city.

Another senior occupation official has said the battle for Kherson will begin in the “very near future.”

Kherson is the only regional capital Russia managed to seize in its invasion and is a capital of one of the regions Putin annexed last month.

The city is located on the western side of the Dnieper river and Russian forces’ position there has become increasingly difficult, after Ukraine succeeded in destroying the bridges needed to supply it.

With the bridges destroyed, thousands of Russian troops risk becoming surrounded in Kherson city and cut off from any supplies.

Russia has already begun evacuating civilians to the eastern side of the Dneipr river. Independent military researchers said Russia has quickly built a pontoon bridge near Kherson that could be used for evacuation or re-supplies.

The Russian-appointed governor said around 60,000 civilians will be evacuated, over the course of seven days.