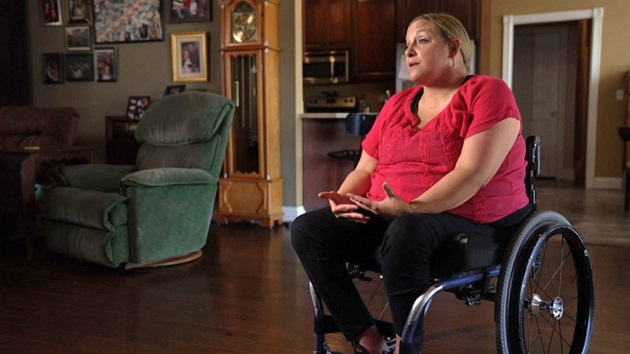 (NEW YORK) — Missy Jenkins Smith was a student at Heath High School in Paducah, Kentucky, in 1997 when a shooter opened fire, killing three of her classmates and injuring her and four others.

Last month, she testified in front of the Kentucky parole board about how the events 25 years ago continue to impact her today.

“I could speak for hours about what my life has been like every minute of every day for the last quarter century without the use of my legs,” she said during the hearing. Smith is paralyzed from the chest down and now relies on a wheelchair.

Jenkins Smith’s testimony came as the board was considering whether to release shooter Michael Carneal on parole. Carneal, who told the parole board that he heard voices on the day of the 1997 shooting and also heard voices just a few days before appearing before the panel, was denied parole and will serve out his life sentence. He also said, “I’m sorry for what I did.”

The shooter, who was 14 years old at the time, has since received multiple mental health diagnoses. He would have been the first school shooter to be released on parole.

ABC News’ “Impact x Nightline” team spoke with survivors and families of the victims for the latest episode in the series.

The shooting was one of the first school shooting tragedies, preceding the shootings at Columbine High School, Newtown Elementary, Marjory Stoneman Douglas High School and, most recently, Robb Elementary in Uvalde, Texas.

Bill Bond, who was the high school principal at the time, remembered where he was when Carneal began shooting. “I’m sitting in my office,” he told ABC News. “And I hear, ‘Pow. Pow.'”

Bond left his office and entered the lobby of the high school, where he saw “one of my own students had a pistol in his hand,” he told ABC News. “Kids were running, and he was shooting. And they were falling.”

Bond confronted the shooter. “I was just moving slow, steady forward, so it didn’t panic him,” he said.

Three mothers had to bury their children in the subsequent days, and an entire community was left to grieve.

“Almost 25 years later, I’m still hearing stories of Kayce’s acts of kindness,” said Sabrina Steger, who lost her daughter Kayce Steger in the shooting. “She’s just an amazing girl. I was lucky to be her mama.”

The victims were Nicole Hadley, Jessica James and Kayce Steger, ages 14, 17, and 15, respectively.

“The community healing as a whole, I don’t think it happened,” Kelly Hard Alsip, another one of the survivors of the shooting, told ABC News. “I think that it will always live inside us.”

“I’m very grateful for it,” survivor Christina Ellegood told ABC News, referring to the parole board decision. “But still very lost on how to feel and how to react to it.”

“We live. We thrive,” said Kelly Hard Alsip. “But it never leaves.”