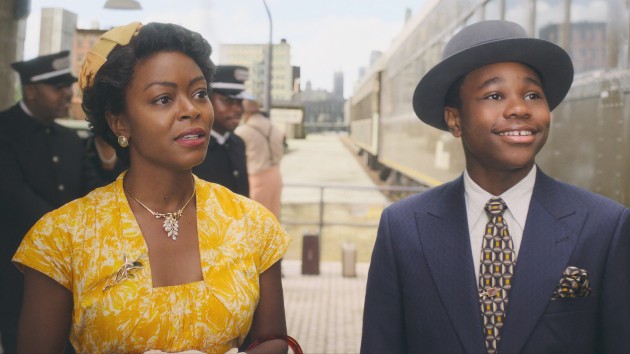 On Friday, the anticipated based-on-real-life drama Till hits theaters in a limited release.

The film stars Danielle Deadwyler as Mamie Till-Mobley, the mother-turned-activist of murdered Chicago teen Emmett Till, who was abducted and brutally killed in Mississippi in 1955 for the “crime” of whistling at a white woman.

The film focuses on how Mamie’s activism after her son’s death galvanized much of the nation, paving the way for the civil rights struggle in the U.S.

Deadwyler told ABC Audio the gravity of the role was not lost on her. “It’s a scary thing to step into this in this role, to step into the truth of Mamie’s humanity,” the actress said. “I keep telling people … it’s not a character, it’s a person, it’s an American truth, it’s a Black American truth.” She adds, “At every step, I wanted to treat it with that kind of gravity.”

Whoopi Goldberg tried to get the film made for decades, and at one point, the EGOT winner wanted to play Till-Mobley herself.

Whoopi instead plays Emmett’s grandmother Alma Carthan in the film.

She explained how thrilling it was for Till to finally get made. “We went to lots … of people saying, ‘Please … this is such an important story.’ And, you know, people were like, ‘Yeah, no, we … know the story and it’s fine.’ And I said, ‘Well, it’s not fine, because it has never been made in 67 years!'”

Till opens in wide release on October 28.