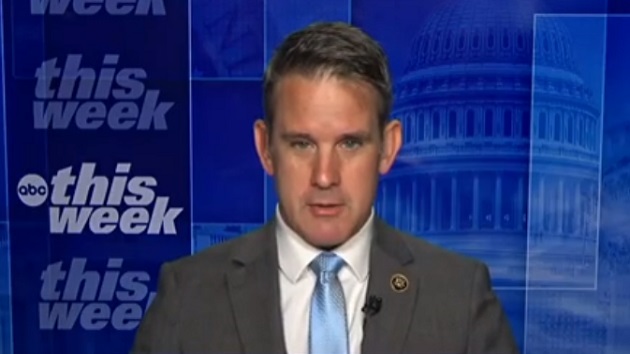 (WASHINGTON) — The House Jan. 6 committee investigating last year’s Capitol riot would need to negotiate with former President Donald Trump if he were to offer to testify live in response to the panel’s subpoena, Rep. Adam Kinzinger said Sunday.

“I think that’s going to be a negotiation,” Kinzinger, R-Ill., a member of the committee, told ABC “This Week” anchor George Stephanopoulos. “I’ll only address that when we know for sure whether or not the president has tried to push to come in and talk to us live.”

“He’s made it clear he has nothing to hide, [that’s] what he said. So he should come in on the day we asked him to come in. If he pushes off beyond that, we’ll figure out what to do next,” Kinzinger said.

He dodged Stephanopoulos’ question on whether Trump should be held in criminal contempt if he does not comply with the subpoena.

“Do you believe that the Justice Department, if the president refuses, should hold him in criminal contempt?” Stephanopoulos asked.

“That’s a bridge we cross if we have to get there,” Kinzinger said, adding, “We’re at a bit of a time limit here. And as we’re wrapping up the investigation, we’re also pursuing new leads and facts.”

Trump has not yet said if he will comply with the committee subpoena but did send the panel a 14-page screed reiterating his election fraud conspiracies.

“We made a decision in front of the American people, not behind closed doors, to begin the process of subpoenaing the former president,” Kinzinger said on “This Week.” “He’s required by law to come in. And he can ramble and push back all he wants.”

Kinzinger’s comments come after the House panel on Thursday voted to subpoena Trump — a rare but not unheard of demand of a former president — as the committee enters the final months of its investigation into the deadly insurrection on Jan. 6, 2021.

Previous committee hearings have detailed how, according to Trump’s former aides and others, he knew there was no legal basis for his scheme to stay in power and was aware his claims of election fraud in 2020 were baseless but continued to push his supporters to march to the Capitol — even as he knew some of them were armed.

Trump has said the investigation is politically motivated and that he did nothing wrong.

The committee, which is not expected to continue into the next Congress, is in the process of formulating its final report, which will include legislative recommendations on how to stop another insurrection and ensure elections are certified at the state and federal levels.

On Sunday, Stephanopoulos pressed Kinzinger on if the committee will be making a criminal referral, which would be a notable recommendation but is not required to open a probe of Trump’s conduct. Kinzinger noted that the government is already investigating.

“It’s not a mandate, but I think … we’re certainly going to address that issue, and we’ll have more to come on that when we make that decision,” Kinzinger said.

“The Justice Department appears to be pursuing this pretty hard,” he said.

Asked about the “threat” from how widespread election denial has become in the Republican Party, despite the lack of evidence, Kinzinger, who is stepping down as a Republican lawmaker in January, said, “I don’t think this is just going to go away organically.”

The public had power to push back as well, he said: “This is going to take the American people really standing up and making the decision that truth matters.”