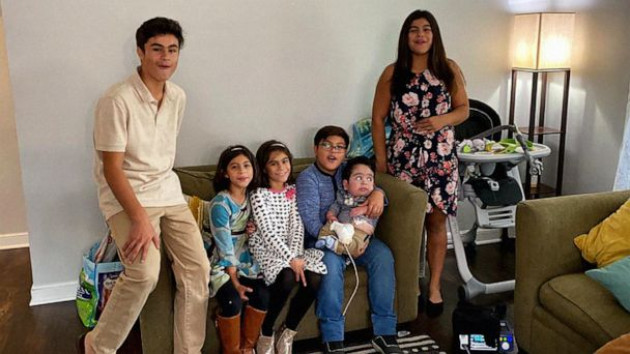 (NEW YORK) — An Illinois toddler is home for the first time and has reunited with his six siblings, after spending most of his young life in the hospital.

According to the National Institutes of Health, there are a wide variety of PLSD-T symptoms, which can vary from person to person but may include atypical development of the bones, a narrow chest, and other characteristics.

“His skeletal dysplasia affects the growth and development of his bones so he will always have a short stature and his bones will not grow and develop normally,” Dr. Erin Stroud, a pediatric hospitalist at La Rabida Children’s Hospital in Chicago, who treated Francesco, told ABC News’ Good Morning America. “But I mean, he has already defied the odds of what his family was told to expect when he was born, so I’m excited to see what else he will do.”

Francesco’s parents, Priscilla and Emanuele Bruno, estimate he has been in seven hospitals since his birth in December 2019, with some of the transfers necessitated by the coronavirus pandemic. Despite a low chance of survival, Francesco has defied the odds and has not only survived but progressed enough to be discharged from La Rabida on Oct. 11 after he was admitted in March 2021.

For the Brunos, the homecoming has felt “beautiful,” according to his mom, who added that his siblings — Sofia, 13, Giosue, 11, Emanuele, 10, Maria Elisabetta, 8, Anna Lucia, 7 and Antonio, 5 — all “can’t get enough” of their time with him.

“[Francesco] can’t really sit up on his own but he rolls around everywhere and there [are] ways for them just to spend time,” Priscilla Bruno told Good Morning America of the siblings’ growing relationships. “They love to sing and play with him and discover his new toys.”

Having Francesco home is especially meaningful considering Priscilla and Emanuele Bruno experienced the passing of a seventh child, a boy named Giovanni, who they had before Francesco.

In the face of Francesco’s medical challenges, his parents say their Catholic faith has given the family strength and played an important role in their shared journey.

“We are people who have always looked for the help of God in our life. We were well aware that what Francesco is, was never going to be a guarantee and that’s still the case today, just because he’s with us today,” Emanuele Bruno said. “But we feel that we have one guarantee, which is the guarantee of heaven.”

Today, Francesco is fed through a gastrostomy-jejunostomy tube (also called a G-J tube) and needs to be on a home ventilator at night to help him breathe but his parents and Stroud remain hopeful about the toddler’s future.

“The ability for him to tolerate breathing on his own is impressive and it also gives us a lot of confidence and hope that this weaning can continue. Obviously, not overnight, but continue to the point where one day he may arrive to being completely trach independent,” Emanuele Bruno said.

“He has done so well that I feel like the sky’s the limit for what he’ll be able to do,” Stroud added.