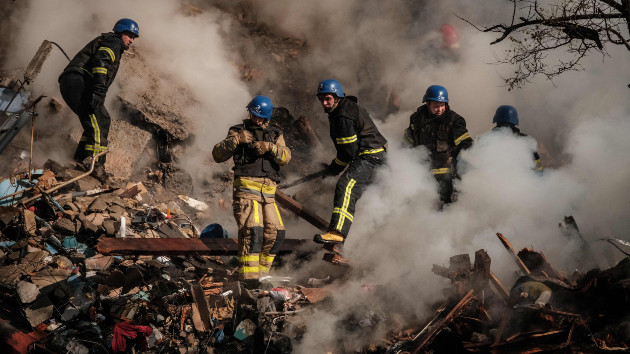 (NEW YORK) — A wave of kamikaze drones struck Kyiv and other Ukrainian cities on Monday morning, killing at least four and wounding several others, after one blew apart a residential building in the capital and other drones targeted thermal power stations across the country.

The attacks appeared to be the largest drone assault unleashed by Russia on civilian targets since the start of the war. Russia launched 43 drones and Ukraine successfully shot down all but six, Ukraine’s Air Force said.

The attack highlighted how Russia is increasingly turning to using attack drones built and supplied by Iran to bolster its failing war effort in Ukraine. Russia has ordered hundreds of military drones from Iran’s government, according to western and Ukrainian officials, as it seeks to fill gaps in its own drone arsenal and as it runs short of long-range missiles.

Iran’s government has denied it is supplying drones to Russia to use in Ukraine but their deployment has already been widely documented since September. Ukrainian troops regularly post images of their wreckage and the drones’ distinctive wing shape makes them easily identifiable.

The 11-foot-long, propeller-powered drones are relatively unsophisticated, according to defense analysts, but still pose a serious threat, particularly if Russia receives them in large numbers.

The Shahed-136 relies on a small civilian motor and commercially available GPS systems, making it vulnerable to jamming and relatively easy to bring down, Samuel Bendett, an expert on Russian unmanned aerial systems, told ABC News. Russian troops have taken to nicknaming these drones “mopeds” because of their loud whine, he said.

While vastly slower than Russia’s advanced cruise missiles, they are still able to fly hundreds of miles, capable of reaching almost anywhere in Ukraine. Slow and low-flying, they can also be difficult for some air defenses to detect and intercept. Their 50-kilogram payload is also relatively limited, but as Monday’s attacks show, the missiles can still sometimes cause significant damage.

The drones’ greatest advantage, experts said, is that they are cheap compared to conventional missiles.

Russia appears to be using the Iranian drones to maintain a campaign of aerial terror aimed at sapping Ukrainians’ will to fight, some experts said. In particular, Russia is targeting Ukraine’s energy infrastructure, hoping to damage it as winter closes in. Monday’s attack again struck critical energy facilities, cutting hundreds of settlements off from the electricity grid, Ukraine’s prime minister said.

The supply of Iranian drones is significant because Russia increasingly has insufficient missiles to keep up a daily campaign against civilian targets, according to Ukrainian and western officials. Most independent experts agree that Russia is unable to manufacture large enough numbers to replenish its stocks. But Iran’s drones may allow Russia to fill that gap, letting it continue its terror campaign and to degrade Ukrainian infrastructure.

The Washington Post reported over the weekend that Iran has agreed to increase its supply of attack drones to Russia, citing officials.

Israel has so far resisted calls from Ukraine to provide its vaunted “Iron Dome” anti-missile defense system and Israel’s government on Monday did not confirm it would send weapons.

But Russia reacted furiously to the possibility, with former President Dmitry Medvedev on Monday warning that it would “destroy all interstate relations” between Russia and Israel.

A senior adviser to Zelenskyy, Mykhailo Podolyak, blamed Iran for Monday’s attacks, writing on Twitter it was “responsible for the murders of Ukrainians.”

Most experts said they did not believe the Iranian drones would be capable of fundamentally altering the military direction of the war, but that they could inflict daily death and destruction on civilians.

Perhaps the biggest threat the drones pose currently is to Ukraine’s energy infrastructure.

“Even if it’s a 50 kilogram warhead flying in at a very high speed and it hits an electric power station, it can cause very significant damage. So I wouldn’t downplay that at all,” said Bendett.

But even such strikes seemed unlikely to break Ukrainian’s determination to fight, he added.

“The cost could be substantial but it’s probably not going to change Ukrainian resolve,” Bendett said.