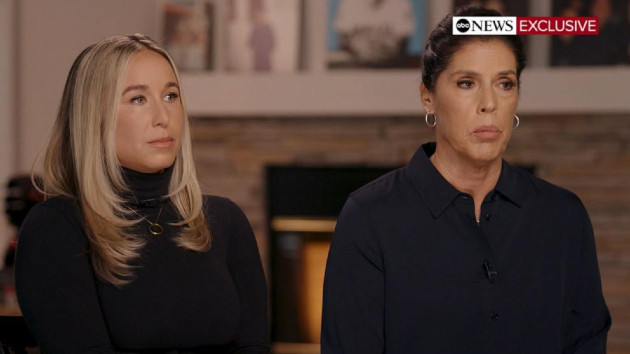 (NEW YORK) — For the first time on camera, the widow of Tyler Skaggs and his mother are sharing their story of loss after the 2019 death of the Los Angeles Angels pitcher. Skaggs was just 27 years old when he was found dead in his hotel room after taking fentanyl-laced oxycodone on the road with his team.

Nearly three years after Tyler Skaggs’ death, his wife, Carli Skaggs, and mother, Debbie Hetman, spoke to ABC News about what justice looks like to their family.

“Any opportunity I get to speak about how amazing of a person Tyler was, that’s what I’m gonna do,” Carli Skaggs said. “And I think that you need to hear from me, his wife, and his mom and not somebody that didn’t know him.”

Carli Skaggs said she met her husband at a house party in 2013.

“We made eye contact. And I think it was over for him,” she said. “He pursued me hard and, you know, it was his persistence that got him a first date with me, and the rest is history.”

The two were married in 2018. The couple was never able to celebrate their one-year anniversary.

“I just, I miss Ty so much. I loved him so much. We had a love that was so special. I think about it, if I ever had children one day, I hope for that. I hope that they could experience the love that I had with Tyler. I hope everyone can. It was a love that you can see and feel. And everybody would tell us that,” Carli Skaggs said.

This week, former Los Angeles Angels communications director Eric Kay was sentenced to 22 years in federal prison in connection to Skaggs’ death. Hetman said it was important that Kay was held accountable.

Over the course of an investigation into Kay, the Drug Enforcement Administration determined that Kay allegedly regularly dealt pills to Skaggs and others. Authorities had discovered evidence that Kay had distributed pills to Tyler Skaggs on the night of his death. Prosecutors also accused Kay of being in the room when Tyler Skaggs choked, but not trying to save him.

“That haunts me all the time,” Hetman said. “To think that somebody is in the room and doesn’t render help to your child, to your son, it’s so heartbreaking.”

During Kay’s trial, five other major league players testified that he had provided them with opioids.

“There’s a chance that they could have gotten a laced pill and could have also lost their life,” Hetman said.

During Tuesday’s sentencing hearing, prosecutors played jailhouse calls and emails from Kay that demonstrated the nature of his crime and lack of remorse, according to the Northern District of Texas U.S. Attorney’s Office.

Hetman said it was difficult to hear the jailhouse calls, which were recorded between Kay and his mother.

“It’s just hard to be in the courtroom and listen to some of the things that we had to listen to. It wasn’t pleasant,” Hetman said. “They don’t even know me or my family.”

Kay was charged with distributing drugs in connection to the accidental overdose; he was convicted by a federal jury in February. Kay’s attorney Cody Cofer said they plan on filing an appeal.

“Eric Kay will continue to fight the allegations. This is a tragic circumstance for everyone involved. Our hearts break for the family of Tyler Skaggs,” Kay’s attorney said in part of a statement to ABC News.

‘One fentanyl pill can kill’

Fentanyl is especially dangerous because users may think they are buying prescription drugs such as Vicodin, Percocet or Adderall, but the illegal knock-off street drugs may be laced with dangerous levels of fentanyl, according to the DEA’s “One Pill Can Kill” campaign.

“The Skaggs family learned the hard way: One fentanyl pill can kill. That’s why our office is committed to holding to account anyone who deals in illicit opioids, whether they operate in back alleyways or world-class stadiums,” U.S. Attorney Chad E. Meacham said in part of a statement following Tuesday’s hearing. “Mr. Skaggs did not deserve to die this way. No one does. We hope this sentence will bring some comfort to his grieving family.”

Since Tyler Skaggs’ death, Major League Baseball agreed to change joint drug programs and has made updates to an existing drug abuse program.

Tyler Skaggs was first drafted by the Angels in the 2009 Major League Baseball draft. After a short stint with the Arizona Diamondbacks, Tyler Skaggs returned to the Angels in 2013. His mother said that, for a California boy, the Angels was his dream team.

“For him to get drafted by the Angels was a dream come true,” Hetman said.

Hetman said she misses her son, adding that he was undoubtedly a “mama’s boy.”

“I want people to remember how giving and amazing he was. He unselfishly gave his time. For me, I’ll always be so proud of just the man he became,” Hetman said.

In the aftermath of Tyler Skaggs’ death and the criminal trial of Kay, both Carli Skaggs and Hetman are still left in shock that Tyler Skaggs had been using drugs in the first place. Hetman said he had been recovering from a series of injuries at the time and under a lot of pressure from his teammates and fans.

“Every professional athlete goes through injuries and there’s a lotta pressure to perform. Ty put a lotta pressure on himself to be the guy on the team who pitches 200 innings, makes 30 starts,” Hetman said. “He may have decided that he wanted to get through the season and he was in pain.”

Carli Skaggs said she knew her husband was in pain at the time.

“We talked about his pain a lot, especially after he pitched. I’d always ask him if he felt OK to make his next start because I didn’t want him to play in pain,” she said. “And he always told me, ‘I’m gonna be fine.'”

The Skaggs family is on a mission to spread awareness of the dangers of fentanyl. Last year, more than 71,000 overdose deaths were linked to synthetic opioids such as fentanyl, according to the CDC.

“Fentanyl does not discriminate, you know. What happened to Tyler can happen to anyone,” Carli Skaggs said.

The family still struggles with their grief and what could have been.

“He would have made an amazing father. He was so great with kids. I wonder sometimes if I’ll ever be as happy as I was,” Carli Skaggs said. “I have a lot of healing to do … I have faith that I’ll get there. I know I’m never gonna be the same. It’s gonna be different, but I believe that I can find happiness again.”

In 2019, the Skaggs family founded the Tyler Skaggs Foundation in his honor. They hope to continue his legacy by helping disadvantaged kids do one of the things that Tyler Skaggs loved best: play sports.

“He just felt that was really important for young kids. He wanted to empower them with leadership tools, teach confidence,” Hetman said. “Those are all things that he got while playing youth sports.”