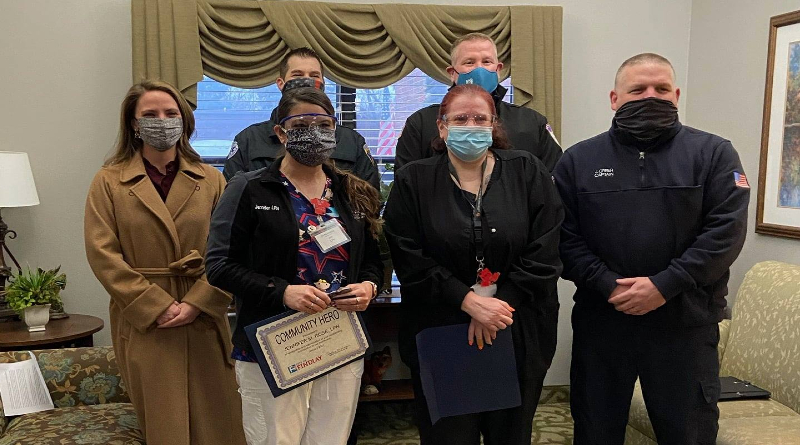 Two women who work at Fox Run Assisted Living in Findlay are being honored for saving a resident’s life and preventing what could have been a big fire at the facility.

Findlay Mayor Christina Muryn recognized Jennifer Rose and Lori Willming as Community Heroes with certificates in recognition and appreciation of their outstanding contribution to the community.

Full details are in the following news release from the city.

Mayor Muryn stated, “I am proud to recognize these two incredible individuals as community heroes for their quick actions. There is no doubt in my mind that they saved not only the resident they were assisting but the entire facility from what could have been a horrendous fire. Many times when things turn out well, we do not hear about them. In this situation, I am glad that we are able to recognize their selfless actions. They are a true example of heroes each and every day. They may not be Findlay residents but they are Findlay heroes.”

In the early hours of December 17, 2020, Jennifer M. Rose, LPN and Lori Willming, RCA, employees of Fox Run Assisted Living acted quickly and courageously to save the life of a resident and keep other residents safe. One of the residents was considered high risk, which required staff to check on her every 30 minutes. According to Debra Conkle, Director of Nursing, Ms. Willming was diligently conducting these checks and was asked by this resident for some pain medication. She immediately went to alert the nurse about this request.

At the same time, Ms. Rose was also conducting rounds, and heard the oxygen machine from this high-risk residents room make a loud noise. She entered the room and found the patient on fire “from head to toe”, apparently caused by the combination of smoking while on oxygen. The nurse immediately grabbed the patient, pulled her to the floor and began rolling her to extinguish the flames. She then smothered the remaining fire with towels, including the oxygen tubing and surrounding carpet, which had also ignited. By this time Ms. Willming had returned, and immediately assisted Ms. Rose in her efforts. She then assisted the surrounding residents in the adjacent rooms, keeping them safe and calm. During these actions the fire department was called to respond.

When the fire department arrived, all flames had been extinguished, but there was smoke in the hallway and the fire alarms were sounding. The patient had burns to her face and head, but was conscious and viable. She was treated on scene by firefighter/EMTs and transported by Hanco EMS. She was then transferred to a burn unit.

The quick actions by Nurse Jennifer Rose and Resident Care Assistant Lori Willming undoubtedly saved the life of the resident the morning of December 17. They also took care of surrounding residents and prevented additional fire damage, while minimizing the life safety hazard of others at Fox Run.

Findlay Fire Chief Josh Eberle stated, “These employees acted very selflessly, and their actions saved a life and prevented a larger emergency that day. They didnt hesitate, and used their training and instincts to do what needed to be done, even risking their own safety to help someone. The community should be very proud of them.”