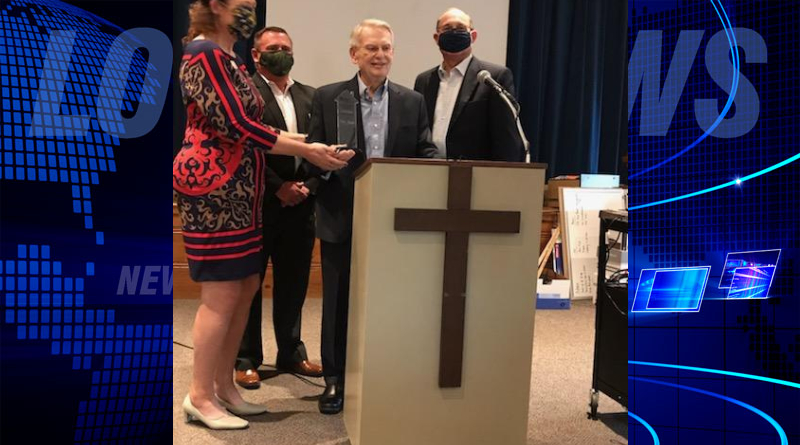 Habitat for Humanity of Findlay-Hancock County has presented its first ever Founders Award.

Full details are in the following news release from the organization.

Mr. Joseph was recognized for his tenure of service to stabilize families through shelter in Hancock County on November 1 at a special 20-year celebration event of the partnership between First Presbyterian Church and Habitat.

Members of the congregation, current and past Habitat presidents, and The Joseph Family were present. Wendy McCormick, Habitat Executive Director, shared the history of the partnership and leadership of Tom Joseph.

Tom Joseph served as President of Habitat for Humanity of Findlay/Hancock County from 1996-2006.

Recruited by founding father Paul Geyer to organize, run, and recruit the first board of trustees, Tom led a ten-member board that wrote Habitat’s articles of incorporation, by-laws, and met the rigorous requirements to become an official nonprofit organization and Habitat for Humanity affiliate.

Together, these committees funded and built the first Habitat home in Hancock County in November 2000, as well as the nine homes that followed in those first ten years.

“I never picked up a hammer in all those years,” said Joseph. “We started a group that traveled to Alpena, Michigan to build a Habitat home and thought we need to do that in Findlay. It was not easy and took three long years to become official, but once established we couldn’t wait to break ground. For me, the reward has always been seeing a family who works so hard have a home and knowing they are doing it so they have a safe place for themselves and their children. I loved seeing them and their first Christmas. It was so rewarding.”

“In our 20 years of partnership with First Presbyterian, thousands of dollars were contributed and 11 homes were built in partnership, including the most recent Apostle Build. Thousands of volunteer hours have been donated to stabilize families in Hancock County,” said McCormick.

“Our current board of directors created the Founders Award to recognize significant lifetime accomplishments like Tom’s. I am honored that Tom still volunteers with Habitat, and is swinging a hammer today to continue to serve families. We try every day to live up to the legacy he and others have built on such a strong foundation of giving a hand up to local families. I can’t thank him enough for launching that vision.”