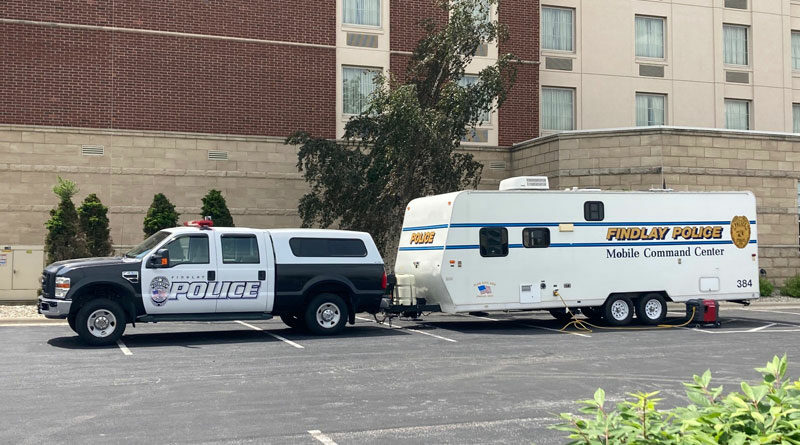 UPDATE 6:15 P.M.  – The Findlay Police Department provided an update on the standoff at the Drury Inn & Suites on Trenton Avenue near Interstate 75.

At about 6:15 p.m. Wednesday, the police department said the situation was continuing and people are asked to avoid the area.

Police responded to the hotel at around 9:30 Wednesday morning in reference to a domestic incident that began in St. Clair County, Michigan.

Negotiators from the police department have been in communication with both subjects and are still trying to resolve the situation.

STANDOFF UPDATE – As of 1:15 Wednesday afternoon the standoff continues at Drury Inn on Trenton Avenue.

WFIN spoke with a Captain who said this all started as a domestic situation in Michigan and a BOLO (be on the lookout) was put for the suspects car which was seen at the hotel here.

Get more in the video.

Findlay police confirm that negotiators are talking with a barricaded subject at Drury Inn & Suites on Trenton Ave. by I-75, trying to get him to come out.

We’re told it’s a domestic situation involving another person and it started around 9:30 Wednesday morning.

Nearby rooms on the floor at the Drury Inn have been evacuated, but the hotel has not been. Police have not said whether a weapon is involved.

Findlay City Schools are out for the summer and Findlay High School would be under lockdown if in session.

WFIN News is on the scene and will pass along more information as warranted.