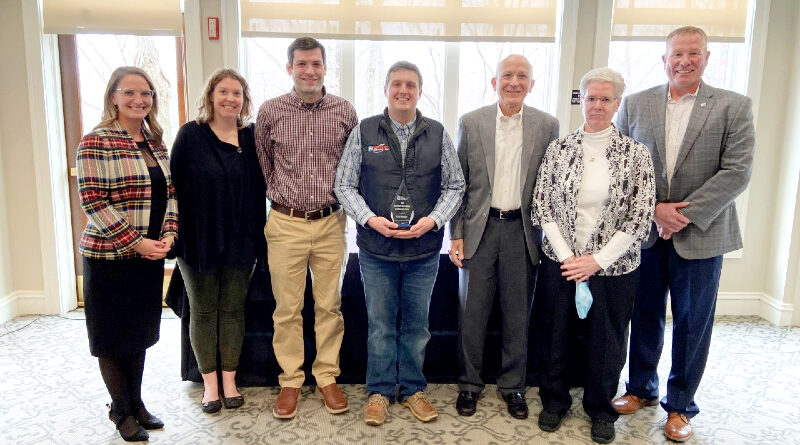 The City of Findlay presented Kyle Inbody, Airport Operations Coordinator with the Findlay Airport, with the John Edward Seman Award for Employee Excellence.

Inbody started with the City of Findlay in 2019 in the Zoning Department as a Code Enforcement Officer.

He transferred to the Findlay Airport in 2021 as the Airport Operations Coordinator.

Inbody earned his private pilot license at age 17 and earned his bachelor of science degree, majoring in Aviation Management and Operations from Bowling Green State University.

Findlay Service-Safety Director Rob Martin says Inbody goes above and beyond to ensure the success of the airport.

“Inbody has tremendous work ethic and always has a positive outlook. I thought Inbody was a great employee when he worked in Zoning, but when he transitioned to the airport, I was able to see him truly thrive in an industry that he is extremely passionate about. The Airport and the City are extremely lucky to have such an engaged individual on our team.”

Martin said Inbody takes on projects in an effort to save money and his hard work has led to an increase in transient air traffic and a 100 percent hangar occupancy rate.

He said Inbody is dependable and goes out of his way to provide the best customer care.

Mayor Christina Muryn added that Inbody is a great asset to the team, and is eager to serve and is always looking for ways for the City to improve.

In his spare time, Inbody is an active member of the local Experimental Aircraft Association (EAA) chapter, is the secretary of the flight club, and is an entrepreneur.

The program is named in honor of Assistant City Engineer John E. Seman who passed away in late 2004. John’s service to the City began in May 2000.

John’s distinguished character and passion for excellence in building a community established a pinnacle for all to follow.

The annual John Edward Seman Award for Employee Excellence is intended to formally recognize a City employee whose service, dedication, integrity, and commitment to community are exemplary.

John’s parents, Dave and Beth Seman, and his brother and sister-in-law Dan and Katie Seman helped present the award.

City employees who have served at least one year, except elected officials, are eligible for nomination.

Nominations were made by employees of the City of Findlay.

A plaque displaying the names of past award recipients is displayed in the Municipal Building.