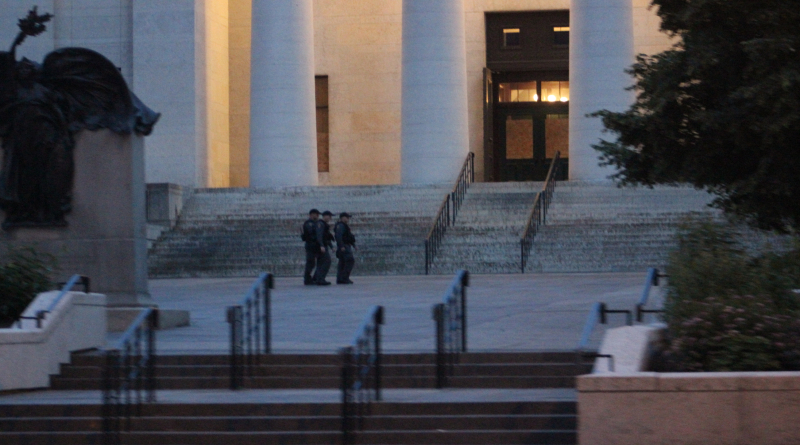 (ONN) – Authorities are conducting a criminal investigation after the outside of the Ohio Statehouse was defaced with red handprints and the phrase ‘hands up don’t shoot’.

State troopers began to wash off some of the red paint on the western side of the statehouse as a group of people protesting police brutality watched.

It’s the latest example of damage to the downtown Columbus icon since protests over the police killing of George Floyd began three weeks ago.

Governor Mike DeWine said he is angry and disgusted by the “criminal” act at the statehouse.

Meantime, police in Columbus clashed with protesters on Sunday afternoon after a group attempted to block off a downtown intersection.

Following weeks of peaceful demonstrations, Sunday’s protest became heated when officials asked the group to move to the sidewalk because they were blocking the intersection of Broad and High streets.

One person was arrested for throwing an object at police, which was caught on body cam.

Columbus Mayor Andrew Ginther released a statement saying the city respects peaceful protests, but streets must be kept open to the public and aggressive acts that put lives in danger will not be tolerated.

NOW: Things have taken a turn here. Police came to intersection and tried to push crowd out with bikes. This happened. @nbc4i pic.twitter.com/HnHxYWkR0l