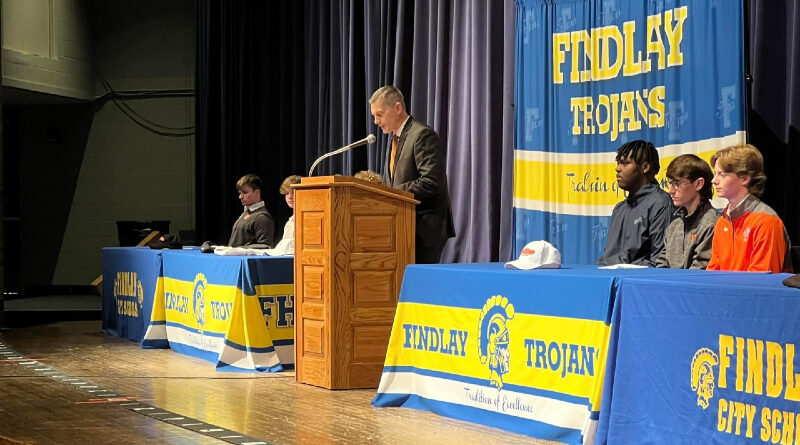 A number of Findlay High School student-athletes recently signed their National Letter of Intent to continue their academic and athletic careers at universities and colleges across Ohio.

Findlay Trojans Athletic Director Nate Weihrauch says he’s known many of them since they were in elementary school and they’re all exceptional leaders on and off the field.

“I always felt this class was talented in so many ways, but most importantly they are exceptional people and leaders with high character and values.”

And Nate says they certainly love to compete as well, “no stage is too big and no light too bright.”

The list of Trojans who recently signed is below, along with some details of each from the school. The list includes seven football players, two tennis, one softball and one lacrosse player.

In addition to these students, back in the fall Max Roth signed to play basketball at the University of Findlay, and Nate expects other signings to occur in the spring.

Justin Roth was a 3 Year Letter winner in both Basketball and Football. Pound for pound is one of the toughest and most competitive athletes in the state. During his senior year, he suffered an injury that should have been a season-ending injury, but yet made the decision to tough it out and finished his senior season making 25 catches for nearly 400 yards with 7 TD’s. In a time of need, Justin is a go-to guy who has no fear. No stage is too big for Justin and no light is too bright. Justin’s grit and talent earned him Three Rivers Athletic Conference All-Conference recognition and All -District accolades in both Football and basketball. Justin’s toughness has continued to the basketball court this season, avoiding surgery and once again starting for the Trojans by being the court general for Findlay. Justin also excels in the classroom earning Three Rivers Athletic Conference All-Academic and being named to the Distinguished Honor Roll. Justin is simply clutch and will succeed in anything he chooses off of sheer will and determination.

Sam Weihrauch is a three-sport athlete, 3-time letterman in Football, Basketball, and Baseball for a total of 9 letters. Sam currently is second all-time in basketball with steals in a game and has earned all-league honors in baseball including First Team All-TRAC and All-District honors as a junior. He was a three-year starter in football where as a senior he broke the single-season tackles record with 159, had 26 tackles for loss, 6 pass breakups, and 4 forced fumbles. Sam earned first-team All-League honors, First Team all-district, First Team All-Toledo Blade team, and received All-Ohio status as a senior. Sam also was selected to play in the coveted North-South All-Star football game. Sam’s highest honor was being named a Captain for the 2021 football season, voted on by his teammates. Sam has also been recognized as well for his work in the classroom by being named to the Distinguished Honor Roll, Academic All-League for 3 years and Scholar-Athlete while at Findlay High.

Ben is a 3-year letter winner in football and will be a Four-year letterman in track where he has earned academic scholar-athlete recognition. After coming off of a shortened COVID season Ben was able to live out his potential as a serious threat to all Defensive Secondaries. During his senior year Ben earned First Team All-Conference, All-District, All Ohio, and was named District Offensive Player of the Year. He broke the school record for Most Career Receiving Touchdowns at 28. Ben will be participating in the distinguished North-South All-Star game in April. In Ben’s three years of football he accumulated 123 catches for over 2000 yards, and 29 total TD’s. He’s earned the respect of coaches and peers across the state with his athletic ability and speed. Ben not only earned First Team All Ohio in football but also was recognized by the state as an All-Ohio recipient in Track. While he is the reigning 400 meter Three Rivers Athletic conference champion, district and Regional Champion and has this year yet to compete.

Rahzik is a 2-year Letter winner and starter in football. This year Rahzik’s game went to the next level as he dedicated himself to the weight room and on the practice field. Rahzik was a key part of the offensive line where he helped protect our QB and create lanes for Isaac and our running backs. With the help of Rahzik, we were able to have a 1,000-yard rusher. His athletic ability for his nearly seven-foot 300-pound frame is simply remarkable.

Max Hosey will be a 4-year letter winner in tennis for the Trojans. Max has been a key part of getting the Trojans Tennis program to the next level. During Max’s freshman year he led the Trojans to an undefeated regular season, the TRAC title and the School’s first-ever trip to the State final 4. Max has been 1st team TRAC both years he has played and his junior year was named TRAC Player of the Year. Both Years Max has been a District Champion in doubles and was named 2nd team All Ohio his 9th-grade year and honorable mention his junior year. His junior year he was a team captain and led the Trojans to another State Final 4 appearance. Max has also excelled in the classroom where he was named a scholar-athlete for FHS and named All conference academically throughout his career. Max’s current record is 67-9 and he is 33 wins away from breaking the school record for wins!

Isaac James was a 2-year letter winner and starter in football. Isaac’s athletic ability, instincts, and pure running ability guided him to eclipse the 1000 yard rushing mark this past season earning him Three Rivers Athletic Conference All league and All-District honors. His athletic ability, toughness, and punishing running style earned him respect amongst his peers and opponents who feared to tackle him. During his Senior year Isaac accumulated 1,127 yards on 164 attempts earning an impressive average of 6.6 yards per carry including an 88 yard TD run against Dublin Coffman who sealed the victory for the Trojans advancing us to the next round of the playoffs. During the 2021 season, Isaac not only rushed for over 1000 yards but also had ten touchdowns to help propel the Trojans to the Regional Semifinals.

Terrion Ross is a 3 Year Letter winner and starter in both Football and Basketball. Terrion has a High Athletic IQ and has provided great leadership here at FHS. Terrion has also led by example in the classroom as well earning Academic All-League and honor roll accolades. He is well respected by his teammates and peers. His athletic ability on both the basketball court and football field has earned him All-conference and All-district honors. On the football field during his senior year, he was versatile and a lockdown corner making 47 tackles, with 3 interceptions and 11 pass breakups. On the offensive side had 20 receptions for nearly 300 yards and 3 TD’s.

Mac will be a 4-year letter winner in tennis for the Trojans. Mac has been part of the varsity lineup since his freshman year. During Mac’s freshman year he was a varsity member on a team that went undefeated in the regular season, won the TRAC title, and advanced to the school’s first ever trip to the State final 4. During Mac’s playing career he has been named honorable mention all TRAC his freshman year and was 2nd team his junior year. Mac was a District qualifier both of his years earning honorable mention all NWO his 9th-grade year and 2nd team his junior year. During his junior year, he played a key role in leading the Trojans back to the State Final 4 . Mac has thrived in the classroom as well where he was named a scholar-athlete for FHS and the TRAC conference while attending FHS. Mac recently was honored by the USTA for his play by being named the Junior Sportsmanship Award winner for the district. Mac’s current record is 41-16 for his FHS career!

Her abilities in the classroom have easily translated onto the diamond where she has earned All Three Rivers Athletic Conference Academic and Merit honor roll. Elizabeth Crites is a three-year letter winner for Findlay Softball, where she received Honorable Mention in the TRAC last season. Elizabeth is also enrolled in her 2nd year of the Millstream Health Professions Class. Elizabeth has a great work ethic and is a tough competitor. She finished her Junior season with 33 hits, 8 of which were doubles, 26 RBI’s, 24 Runs. She also finished with a .398 batting average and a .492 on-base percentage. Elizabeth was a member of the FHS Basketball team both her freshman & sophomore years.

Tyler Wolke is a 4-year letterman for lacrosse. He has been instrumental in the transition in Lacrosse moving from a club sport to a varsity sport at Findlay High School. Tyler is dependable, hard-working, first to practice, and respected amongst his peers and coaching staff. Tyler was named the 2021 offensive MVP. He had a career-high 4 goals and an assist in a game.