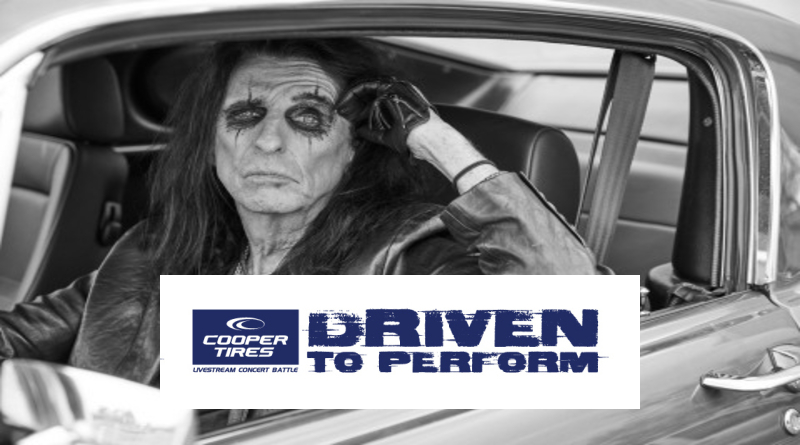 Rock legend Alice Cooper is teaming up with Cooper Tire to host the nationwide “Driven to Perform” garage band contest.

The victorious band will get the opportunity to open for Evanescence in a livestreamed performance in May.

Full details are in the following news release from Cooper Tire & Rubber Company.

The “Coopers” are ready to rock as Cooper Tire today kicked off Driven to Perform a nationwide garage band contest in partnership with Rock & Roll Hall of Fame inductee Alice Cooper. Cooper Tire and Alice Cooper, credited as the “godfather of shock rock,” teamed up to scour the nation and identify three talented American garage bands. Alice Cooper, who recently released his 28th album, “Detroit Stories,” will provide advice and feedback to the bands, and call on fans to cast their votes to crown the Driven to Perform winner at www.DrivenToPerformConcert.com. The victorious band will get the opportunity of a lifetime to open for Evanescence in a livestream performance on May 13.

The three finalist bands are Suspect208, South of Eden and Ashland. Each was asked to submit an original work, as well as a cover of Alice Coopers song, “Under My Wheels.” Videos of the performances will be available beginning April 16 at www.DrivenToPerformConcert.com, and fan voting will run through April 28. While votes are being cast, Alice Cooper will coach the up-and-coming rockers on their sound and soul – from how to stand out and stay true to their roots, to how to build a music career that lasts. The feedback sessions will also be shown at www.DrivenToPerformConcert.com. The band that receives the most votes wins the opening act spot for Evanescence, and with each vote, fans will be given access to the Evanescence livestream concert behind the release of their latest album, The Bitter Truth, which reached #1 on the iTunes Albums chart in 22 countries.

“Teaming up with Alice Cooper to find the next great garage band is a perfect fit for the Cooper Tires brand,” said Chris Ball, Senior Vice President & President, Americas, Cooper Tire & Rubber Company. “Drive and performance are at the core of what we do as a company that designs and produces winning tires. Alice, with his legendary performances and endurance as an artist, personifies these qualities as well. We are looking forward to seeing how the bands perform and how fans respond to each unique sound. With the opportunity to open for Evanescence, we are confident we will see the true drive and grit of each band as they vie to take that grand prize.”

The “Coopers” are also united by a common passion for cars and music. Alice Cooper, whose new album “Detroit Stories” recently debuted at #1 on Billboards top album sales chart, named the work for his hometown, the Motor City. The album gathers well-known Detroit musicians to record in the city that made them famous and inspired their music. Alice Cooper is also a classic and muscle car super fan who has an evolving collection that currently includes a 1968 Bullitt Mustang, an Avanti, and an Alfa Romeo Spider.

“I was born and spent my early years in Detroit, so cars are in my DNA,” he said. “The music of Detroit is a true part of the soundtrack of my life. This garage band contest and the concept of being ‘Driven to Perform’ strike a chord with me because I started out in the music business really young. I began my career the same way so many of these bands did. I was driven to someday get up on stage and perform. It is in garages across the country that so many musicians find their sound and get their start.”

We’ve picked 3 promising bands that are #DrivenToPerform. It’s up to you to choose the winner!​​

The prize? Opening for @evanescence on our live stream, hosted by @AliceCooper! A winner will be chosen on April 29th.