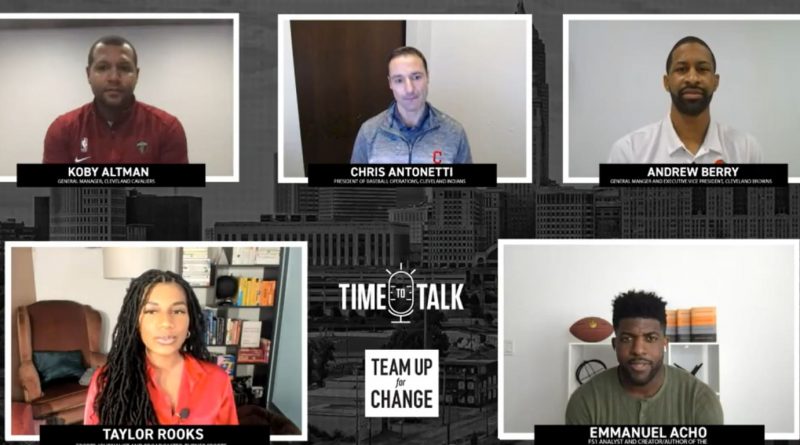 CLEVELAND — This year has presented some unprecedented hurdles for everyone. People have had to learn to navigate communicating virtually, work around technical difficulties, figure out how to do their jobs from home and continue life as normally as possible under unusual circumstances. None of this has prevented the Cleveland

CLEVELAND — This year has presented some unprecedented hurdles for everyone. People have had to learn to navigate communicating virtually, work around technical difficulties, figure out how to do their jobs from home and continue life as normally as possible under unusual circumstances.

None of this has prevented the Cleveland sports teams, including the Indians, from wanting to work even harder.

Along with presenting unique changes that we’ve all had to make, 2020 has given perspective to hardships that people endure. Because of that, the Indians, Browns and Cavaliers decided to team up on Wednesday night to talk about their alliance to help make a difference in the Cleveland community.

“During those months,” Indians president of baseball operations Chris Antonetti said, “we had been spending a lot of time, internally, reflecting, ‘How do we make an impact? How do we continue to grow as an organization and how can we make an impact in our community?’”

Those conversations prompted the Tribe to reach out to the Browns. When they did, they learned that the Browns had already had similar conversations with the Cavaliers. That’s when an alliance was born.

“Instead of competing, we can come together and collaborate and amplify the impact that individual organization can have,” Antonetti said. “It’s been incredibly fulfilling so far, and one of the things we’re committing to doing is making sure that it’s not just a moment, but something that we’d be able to sustain over time.”

Our final Team Up For Change “Time to Talk” conversation starts now!
Tune in and reply with questions for our panelists! https://t.co/ldTxxWdryW

The alliance wants to focus on three pillars: voting, law enforcement and education. The hope is to encourage people to get registered to vote, to help them understand the hurdles with law enforcement and to inform them about how they can make improvements and continue on to better education. On Wednesdays, leaders from each of the club’s front offices have a call to get updates on the progression of their ideas, and Antonetti, Altman and Berry have conversations every few weeks.

“If we fast-forward two or three years from now and look back and say, ‘Wow, this group coming together made an impact in these areas in the Cleveland community and they did it by connecting people, by creating conversations, by committing resources,’” Antonetti said. “So when we look forward, we can say we’ve made changes. Not just intend to act, but there’s action and sustained action that follows through.”

The Indians, Cavaliers and Browns are only at the start of their journey to see positive change in Cleveland. But they want to be the first to demonstrate what Acho believes to be one of the most important messages to learn during this time: “Don’t let the fear of not being able to do everything limit you from doing anything at all.”

“At this point, it feels — given the importance and gravity of the issue — that silence or inaction is complicit acceptance,” Antonetti said. “I personally feel, our organization feels, our alliance feels we have to be a force for positive change, because standing on the sidelines isn’t OK.”