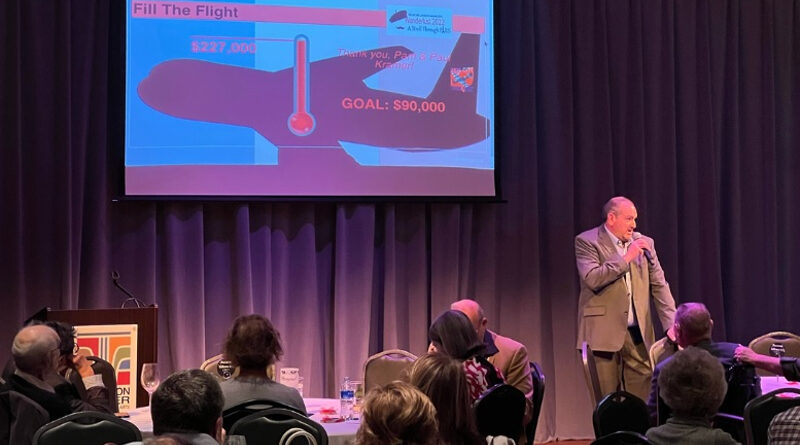 Gilmore Jasion Mahler‘s Wanderlust, a signature benefit event for Flag City Honor Flight (FCHF), raised $233,676 in support of the nonprofit’s mission to take area veterans to Washington, D.C. to see the memorials built in their honor.

Wanderlust: A Stroll Through Paris was held on October 28 at the Marathon Center for the Performing Arts in downtown Findlay.

It featured a live auction and raise the paddle appeal known as “Fill the Flight,” with the goal of filling every seat on the plane.

Auctioneer Trent Farthing of Key Realty donated his talents for the evening. By the end of the night, the generous donors and event sponsors had given enough to fill not one, but two planes full of veterans and part of a third flight.

Flag City Honor Flight officials say the total cost per trip is approximately $100,000. All proceeds from Wanderlust go directly to the nonprofit, which is part of the National Honor Flight Network.

Funded solely by donations, veterans don’t pay a penny to make the trip. FCHF paused flights in 2020 and 2021 due to the pandemic. This year’s flights were June 7, September 13, and November 1. The November 1 flight, Flag City Honor Flight’s first ever all Vietnam-era flight, had a generous corporate sponsor, Ohio Logistics, covering the cost of the journey.

GJM’s Wanderlust will help cover the cost of flights in 2023 that will take veterans of all eras (World War II, Korea, and Vietnam) to our nation’s capital.

“We’re so appreciative of Gilmore Jasion Mahler for their commitment to helping Flag City Honor Flight to honor our veterans with a trip to Washington, D.C.,” said Honor Flight Executive Director Bob Weinberg.” Thanks to Wanderlust, we know hundreds more will make the journey in 2023.”