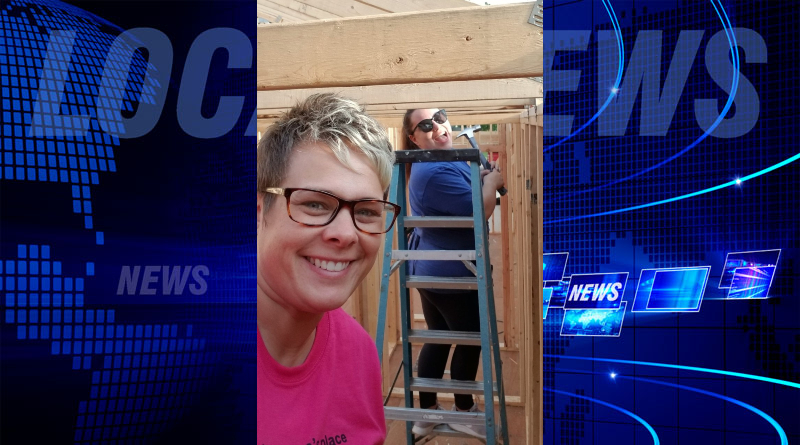 Details are in the following news release from the organization.

At the annual Volunteer Celebration dinner November 13, Habitat for Humanity of Findlay/Hancock County recognized several outstanding volunteers for contributions to the organization. The dinner, which was sponsored by Olive Garden, was held at First Presbyterian Church in Findlay.

Although Habitat is blessed to work with hundreds of outstanding volunteers each year, the following stood out and were recognized for their tremendous efforts in 2019.

Photo of the Year is presented to the photographer whose photo best represents what Habitat means to our volunteers, partners and families. This years award was presented to Rhiana Grieger. The photo taken by Rhiana (above) shows herself and fellow Habitat 2019 new homeowner Shae Golden working together and building a bond and a home as they construct Habitats 43rd house in Hancock County.

Youth Leadership Volunteer of the Year is presented to a volunteer under 25-years-old who exemplifies outstanding character and leadership. This years award was presented to Halle Sattler. Halle is immediate past president of the University of Findlay Habitat Chapter. She proved herself as an invaluable volunteer during Habitats move to its new location at 1200 Commerce Parkway. While at UF, she went participated in alternative spring break programs and represented both the campus and the affiliate at Habitat on the Hill advocacy day in Washington DC.

Golden Hammer Award is presented to someone who demonstrates understanding, commitment and contribution to multiple programs to support the overall mission of Habitat. This years award was presented to Dan Eborg. Dan is one of the crew leaders on the construction and repair team. He has over 10 years of service with Habitat, logging over 1,000 hours on new builds, home rehabs and critical repair projects. Dan helped Habitat by developing blueprints and house plans for the construction team and training volunteers to carry out those plans.

Paul Geyer Leadership Volunteer of the Year recognizes our affiliates most exceptional leaders and visionaries. This years award was presented to Mike Pepple. Mike has served as a Board Member since 2013. He was the Board Development Chairperson 2013-2015, served as Vice President 2015-2018, and has been Board President since April 2018. He was instrumental in securing construction financing for Habitats new location, as well as coordinating a plan for the capital campaign and the relocation. Mike has attended every Raise the Wall ceremony, every home dedication, and volunteered on every project since joining the Board. Mike attended the Habitat for Humanity State Conference in October, where he was named 2019 Volunteer of the Year in Ohio.