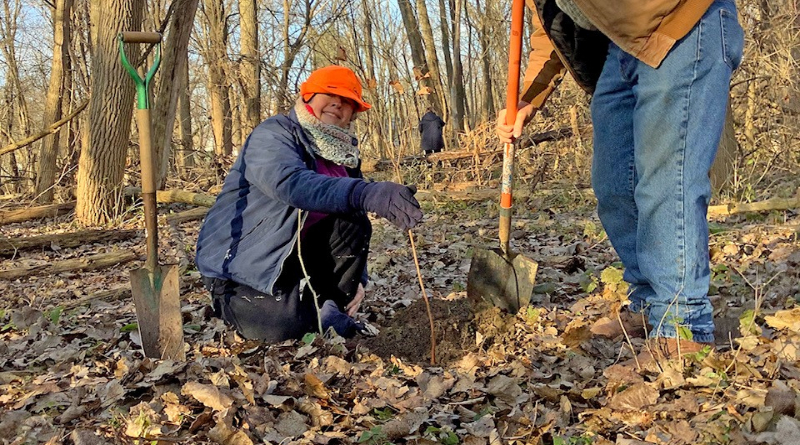 The Hancock Park District has named Betsy Worden its VIP (Volunteer in Parks) of the year for 2020.

The award goes to an individual who exhibits leadership and enthusiasm for the projects and services they perform and for their willingness to promote volunteerism in others.

Above and below are pictures of Betsy planting trees at Findlay’s Blue Rock Nature Preserve. Read more about that here.

Get more on the award in the following news release from the park district.

Betsy Worden has been named the 2020 Charlie Meadows Award winner by the Hancock Park District (HPD). Each year since 2012, the award has been presented to VIPs (Volunteer in Parks) who most exhibit characteristics of leadership, enthusiasm for the projects and services they perform and for their willingness to promote volunteerism with others. Worden was announced as the award recipient on Tuesday, January 12 during the monthly meeting of the HPD Board of Park Commissioners at Oakwoods Nature Preserves Richard S. “Doc” Phillips Discovery Center.

Worden has been an active HPD VIP for many years. HPD Natural Resource Manager Chad Carroll nominated the Findlay resident in recognition of her past and current involvement in the Hancock Park System.

“Over the past year Betsy has helped with the collection of native seeds from park properties from a variety of species ranging from prairie plants to trees,” said Carroll, adding that these seeds will be used to enhance the natural areas where non-natives were removed. While doing this she has informed me of many interesting plants she has found that have been added to our plant inventory as well as alerting me to the presence of non-native species.

Worden was also largely responsible for the presence of a number of volunteers that assisted in an autumn tree planting at Blue Rock Nature Preserve, a park where there is a concerted effort to remove invasive woody plant species to make way for native plant species. “She sent text/calls out as well as posting on Facebook to recruit volunteers.” Carroll noted.

Worden also writes the Hancock County Naturalist Newsletter. While the group is not directly affiliated with the HPD, members actively assist in natural resource projects and monitoring. “(Worden) typically writes the main article of the newsletter which tends to get people excited and interested in the natural world,” said Carroll. “Then she encourages them to get out and enjoy the natural world in our parks.”

“I knew Charlie Meadows for a number of years. He was good man. He was always ready to tackle anything which makes this award even more special to me,” said Worden.

The purpose of the VIP Program is to offer opportunities for county and area residents to give personal time and offer their special talents to supplement the HPD staff in providing quality programs, maintaining parks for public use and preserving natural areas. The Charlie Meadows Award is named for the park districts first volunteer coordinator. In 1982, Meadows was instrumental in launching the Helping Hands program to get people involved in the parks.

For more information about the HPD VIP Program, or for upcoming park programs and events, view the HPD Seasonal Program & Event Guide at www.HancockParks.com under the “Park News” section or call the park office at 419-425-7275. 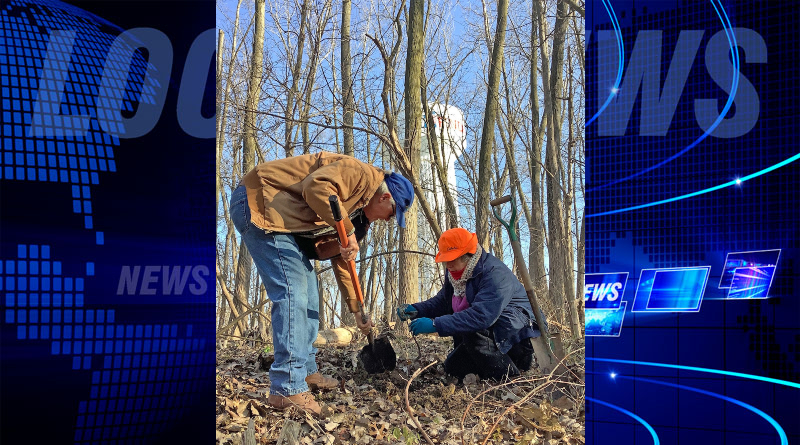