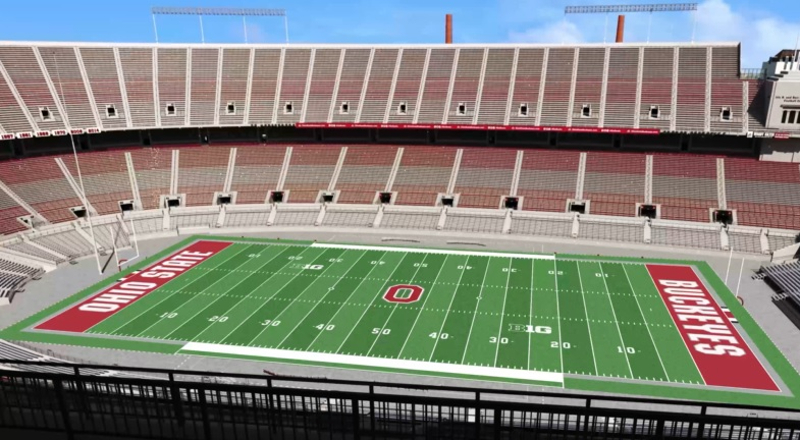 The Ohio State University has unveiled the design of the new playing surface that will be installed at Ohio Stadium over the summer.

The Ohio State Department of Athletics engaged Buckeye Nation in October to send in fan-inspired design concepts for the field.

More than 1,300 designs were submitted, and elements most favored by fans included the Block O at midfield, incorporating Buckeye leaves, and scarlet end zones (46%, compared to 21% suggesting gray end zones).

All three of those elements, plus others favored by fans, are included in the new design that was ultimately determined by an internal panel.

Details of the design include:

The Block O at midfield has been emphasized with the outer strokes color adjusted to gray.
Buckeye leaf decals replace the two X’s at the respective 35-yard line kickoff locations.
Official OHIO STATE and BUCKEYES athletics word marks, consistent with those on other venue playing surfaces and on team uniforms and apparel, are in the two scarlet end zones.
The outer boundaries of play have been color adjusted to gray to complement the scarlet end zones.
Yard line numbering matches the block type font on the players’ uniforms.
The iconic black/white/scarlet striping pattern, found most prominently on Buckeye helmets, will have a home in each end zone along the end lines, matching the width of the goal posts.

🔢 BY THE NUMBERS: a breakdown of #TheShoe field designs submitted by Buckeye fans: