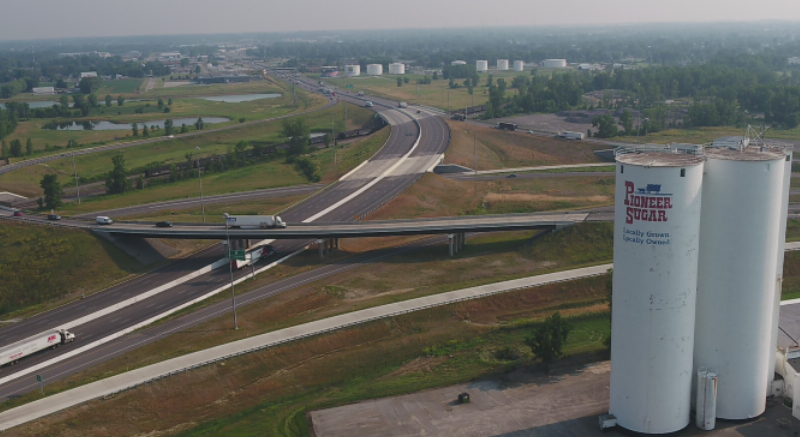 The Ohio Department of Transportation has won an award for its project to widen and reconstruct Interstate 75 in Findlay.

During a virtual presentation held at ODOT District 1 in December, the American Society of Civil Engineers (ASCE), Toledo Section, awarded the Interstate 75 widening and reconstruction project its Project of the Year Award.

The award was specifically for the design and construction of the interchange between I-75 and U.S. 68 / State Route 15 because the project presented a lot of challenges as it was hemmed in on all sides.

“We want to congratulate you on this wonderful accomplishment; it’s a tremendous project,” said Adam Hoff, P.E., ASCE past president and president of Hoff Consulting Services, LLC.

“There were a lot of players involved, and it took a big team to make the project come together,” said ODOT Design Engineer Eric Scheckelhoff.

“The initial team included ODOT and the design consultant, WSP. The contractor, Beaver Excavating, Findlay, and their consultants joined the project team. ODOT had additional consultants on board for real estate and environmental services. In addition, the project also required coordination with Norfolk and Southern Railroad, Findlay Airport, and the Federal Aviation Administration (FAA) and their consultants,” Eric said.

ODOT says there were many challenges they encountered with designing the project.

The predominant consideration throughout the design process was how to create a free-flowing interchange in an area hemmed in on all sides by a railroad to the north, an airport to the south that wraps around the project, and quarries to the east and west.

Other constraints located near the project include a tank farm, wetlands, and an old landfill.

ODOT says cooperation and communication were vital to the success of the design team who were working with so many stakeholders.

For instance, the design team developed a specialized process to speed up approvals from the Federal Aviation Administration (FAA) who required surveys, exhibits, and detailed drawings to approve over 400 permanent and temporary points of barrier such as light poles, towers, utility poles, signs, and even cranes.

The project reconstructed and widened about five miles of I-75 from just south of the Harrison Street overpass up to the County Road 99 interchange.

Notable features of the project included construction of a third lane in each direction on I-75 and the redesign of the interchange at Lima Avenue with U.S. 68 / State Route 15 into a double roundabout.

Below is video from August of 2020 when the project was almost finished and we spoke with Mayor Muryn and the director of ODOT.

(above pic courtesy of ODOT)

A man was flown to a hospital by a medical helicopter after crashing his car a little north of Findlay.