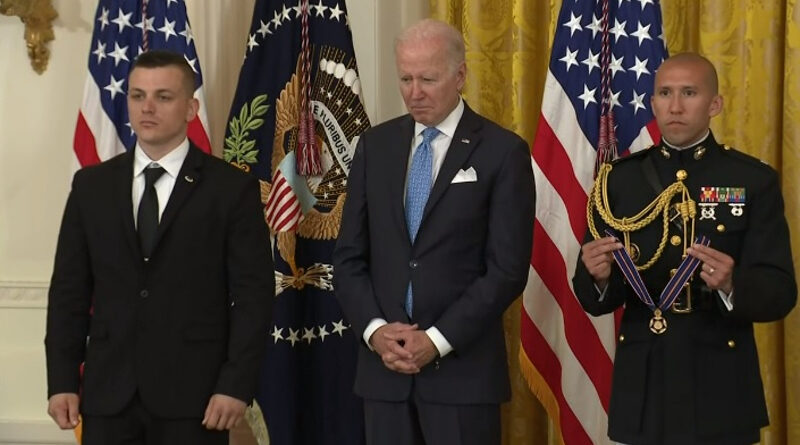 An Ohio law enforcement officer was honored at the White House for ‘demonstrating courageous action and uncommon poise to save lives’.

President Biden awarded Dalton Rushing, a deputy sheriff in Perry County, the highest decoration for bravery a US officer can receive – the Medal of Valor.

In 2021 – Rushing plunged into a frozen lake to rescue a person.

When the victim couldn’t grab on to him and said he was prepared to give up, deputy Rushing tied a rope to the victim and submerged himself into the icy water to rescue the man.

In December, Rushing was awarded the Medal of Honor from the Buckeye State Sheriff’s Association.

This week is National Police Week as well as Light Ohio Blue week.

He was off duty when he responded to a call about several individuals who fell into a frozen pond.

Without any thermal protection, and equipped with nothing but a throw rope, Sprunger jumped into the freezing water to rescue the victims – a grandfather and his two grandchildren.

He pulled the grandfather and one child out, and guided medics who arrived to the second child – demonstrating extraordinary courage to save lives.