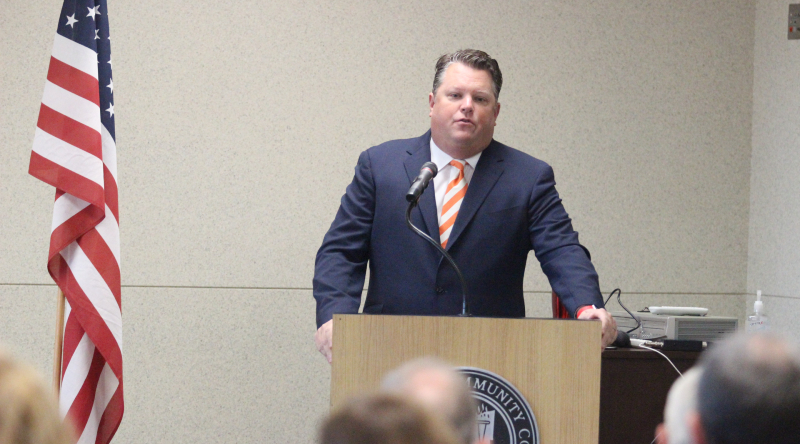 The Republican from Kenton says the new initiative will help Ohio rebuild its population and future workforce with the creation of state incentives in partnership with Ohio’s institutions of higher education and business.

“I’m excited to be joined with leaders of higher education and business to announce fresh ideas and creative solutions to help recruit and retain Ohio’s future workforce, increase our population and widen our tax-base for a more robust and stronger economy,” Cross said.

He says the primary focus of the legislation is to incentivize Ohio’s younger population to live, learn, work and prosper in Ohio instead of leaving the state after graduation.

The bill will offer four key incentives that are centered around college recruitment, degree advancement, business-education partnerships and workforce retention.

The highlights of the legislation are as follows:

– If a graduating college student takes a full-time job offer in Ohio vs. out-of-state employment, they can receive a 100 percent refundable state income tax payment for up to three years of employment.

– Ohio does not currently offer any merit-based scholarships until now! Under the Choose Ohio First Program, 100 scholarships of $25,000 will be made available for out-of-state students enrolling to any of Ohio’s four-year colleges/universities if they are in the top 5 percent of their high-school graduating class AND pursuing a degree within a STEM field. In addition, the scholarship will be a forgivable loan if they remain in Ohio after graduation.

– To better incentivize paid internships with Ohio businesses, an Ohio employer will earn a refundable credit of 30 percent of paid wages for students who engaged in internships, apprenticeships and co-ops.

– Students who have completed their associate degree and wish to pursue a bachelor’s degree may obtain an additional Ohio College Opportunity Grant.

The legislation will also codify into the Ohio Revised Code the Governor’s Workforce Development Board to include the Chancellor of Higher Education or a representative named by them.

“I am honored to join Rep. Cross for the introduction of the GROW Ohio Act, a piece of legislation that will be vital in our quest to grow Ohio’s workforce,” said Ohio Chamber of Commerce President Steve Stivers.

“Young people are a valuable asset for a thriving economy. In conjunction with other partnerships and strategic plans, this bill will make it more attractive for this population to build their careers and lives in Ohio, strengthening our state’s position as a leading force in business.”

The legislation is a collaborative effort between the Ohio legislature and Ohio’s institutions of higher education and businesses.

The bill has been filed with the Ohio House Clerk’s Office to start the legislative process.