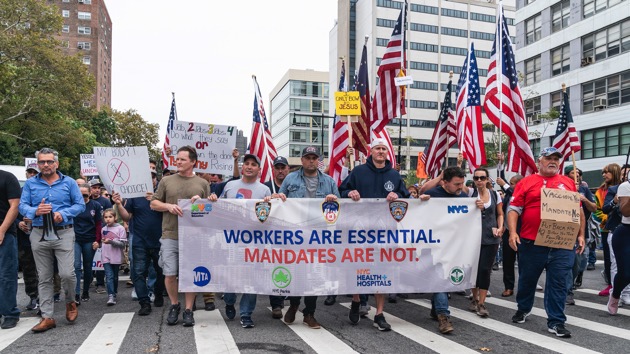 (NEW YORK) — Nearly 1,500 New York City municipal workers have been fired over their refusal to get vaccinated against COVID-19.

That number represents less than 1% of the city’s workforce, but it appears to be the country’s largest workforce reduction linked to COVID vaccines.

Under a mandate set by former Mayor Bill de Blasio, city employees on leave without pay and those who were newly hired had been told they had until Friday, Feb. 11, to show proof of vaccination or they would face termination.

The workers on leave had to submit proof of their first dose and would then have 45 days to receive a second dose. The new workers had submitted proof of an initial dose when they were hired and were required to show they’d completed their vaccine series.

The 1,428 employees who were on unpaid leave for more than three months lost their jobs.

Data provided by City Hall Monday shows the majority of employees who were fired worked in the Department of Education, which saw 914 people let go. The Housing Authority terminated 101 workers.

Meanwhile, 939 employees on unpaid leave — about 40% of the group — opted to get vaccinated and keep their jobs.

Additionally, 99.8% of new employees showed proof of being vaccinated. Only two workers hired after Aug. 2 failed to get a COVID vaccine and were fired Friday.

The City Hall data shows the two employees were from the Department of Sanitation and the Human Resources Administration, respectively.

“City workers served on the frontlines during the pandemic, and by getting vaccinated, they are, once again, showing how they are willing to do the right thing to protect themselves and all New Yorkers,” Mayor Eric Adams said in a statement. “Our goal was always to vaccinate, not terminate, and city workers stepped up and met the goal placed before them.”

He continued, “Out of all the new city employees who received notices two weeks ago, only two who worked last week are no longer employed by the city. I’m grateful to all the city workers who continue to serve New Yorkers and ‘Get Stuff Done’ for the greatest city in the world.”

A city official told ABC News that residents should not notice any disruption of services due to the firings.